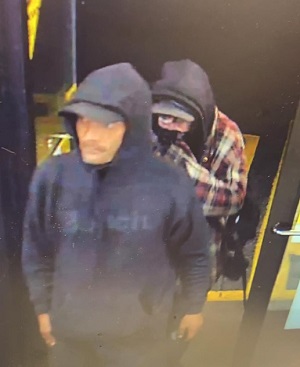 The Nanaimo RCMP is investigating an armed robbery involving a knife at the 7-11 located at 477 Terminal Ave. The incident occurred just before 5 AM on Saturday August 20, 2022. Attached is a photo of the two suspects.

An employee told police that two men walked into their store with one walking behind the counter. With a knife in his hand, he demanded the money from the till. After taking an undisclosed amount of cash, he and the other suspect left the business. Police were on scene within minutes but were unable to locate the suspects.

The primary suspect is clearly shown walking into the business followed by the second suspect whose face is hidden from the camera. The primary suspect presents as a Caucasian man. He has a thin build, is of medium height and was sporting a moustache. His clothing consisted of a blue hoody pulled over a dark baseball cap, dark shorts and runners. The second suspect was wearing a black mask, a plaid jacket with a black hoody underneath, and a ball cap.

No employees were injured and the Nanaimo RCMP Victim Services is engaged. If anyone has information on this incident, please call the Nanaimo RCMP non-emergency line at 250-754-2345, and quote file # 2022-29084.