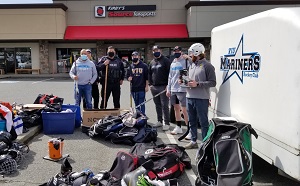 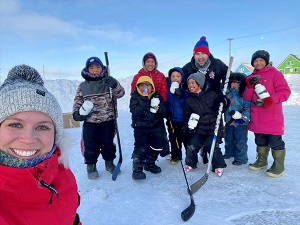 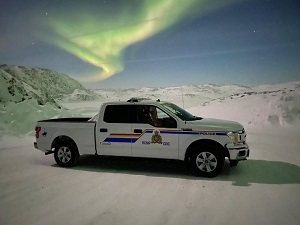 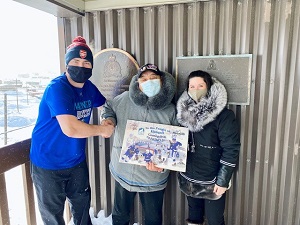 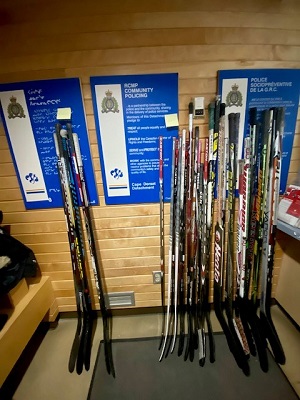 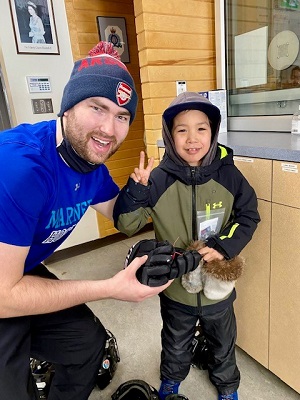 Cst. Josh Cook’s wish finally came true when a Canadian North cargo plane recently landed in Kinngait, Nunavat. What made this flight so significant was that it was carrying 200 pounds of hockey equipment destined for the youth in that community. Kinngait for those who are not familiar with it, or formerly called Cape Dorsett, is located on the southern tip of Baffin Island, some 3200 kms from Nanaimo.

Most of the hockey equipment in the community is showing its age and sadly, there just isn’t enough to safely outfit the youth who simply love this great game, said Cst. Cook.

Cst. Cook, is formerly from Nanaimo and played for the VIU men’s hockey team. Upon arriving in Kinngait,  one of the first things he did was call his friends back home to spearhead an initiative to find gently used hockey equipment.

Within days, the word spread and people from all backgrounds were coming forward to make donations. Local businesses also stepped up such Kirby’s Source for Sports, who donated their services by providing free skate sharpening. Others, who wish to remain anonymous, donated several dozen pairs of skates.

Collecting the hockey gear was the easy part. Getting it up north took some planning. After many months of countless phone calls, emails and experiencing set backs such as flash floods, road washouts and sudden snow storms, the equipment was finally delivered. In mid-January 2022, Myles Parsons, GM of the VIU men’s hockey delivered the gear to its first destination- the Victoria International airport.

From Victoria, the gear was then flown to Edmonton. There, RCMP officers stationed at the airport took over and ensured it was safely delivered to the Canadian North Cargo terminal for its final transport to Kinngait.

This initiative would not have been possible if it was not for the incredible partnership forged with WestJet Cargo and Canadian North Cargo. Both recognized the importance of this equipment. Each demonstrated incredible community spirit by donating their services, time and space on their respective planes to ensure the hockey gear made its way to Kinngait, said O’Brien.

On Thursday March 10, 2022 Cst. Josh Cook and his Fiancé Katie Isherwood travelled to Kinngait, Nunavut to complete a year’s worth of multi-organizational team work. The task was to deliver hockey gear that had been donated by Cst. Cook’s old hockey team – VIU Mariners. After presenting the Mayor of Kinngait with a plaque from Nanaimo, next up was to hand out the equipment to the kids.
The result was amazing, tons of youth flooded through the front doors of the Kinngait detachment and within around half an hour all the equipment was gone! The impact that this gear will have for the youth and the use they will get out of it is huge. They can now play Canada’s game of hockey with a friend on the icy lakes and at the local rink. Game on!