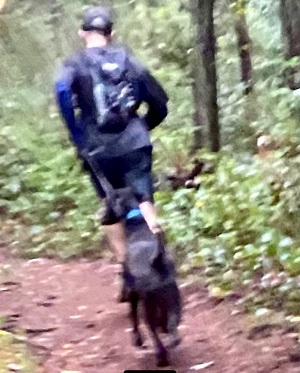 At approximately 11:20 AM on November 9, 2021, a woman was running on a trail in Linley Valley off Burma Rd. A black dog, believed to be a standard poodle or similar breed with a cropped tail, approached and accidently tripped her. The woman called out to the owner of the dog who appeared to be another runner. The man then stopped running and came back to where the woman was and violently pushed her to the ground. She managed to snap a picture of him which appeared to enrage him more. The man then aggressively held her arms which caused her to scream. At this point, he broke off the attack and was last seen running along the trail with his dog.

The male is described as 30-40 years old, Caucasian, slim build, short blond or brown hair, and clean shaven. He was wearing a blue long-sleeved athletic shirt with dark shorts, ball-cap and hydration pack.

This is a concerning event in that this attack, by an athletic male on a female, appeared unprovoked, said Constable Simon Gallimore, of the Nanaimo RCMP. Stranger on stranger assaults are rare and police would like to identify this suspect in order to safe guard the public and further the investigation.