The Nanaimo RCMP continue to investigate a brazen daytime shooting homicide that occurred at approximately 3:30 p.m. on Thursday, May 20, 2021 near the Wendy’s Restaurant on Highway 19A at Rock City Road.

At this time, there is no risk to the public and three suspects with ties to the Lower Mainland were taken into custody.

We believe this event has a nexus to the ongoing gang-conflict and violence currently plaguing a number of Lower Mainland communities, stated Acting Inspector Donovan Tait of the Nanaimo RCMP.

The investigation and evidence collection continues through the weekend and the Nanaimo RCMP is seeking further assistance from the public.

We would like express our sincere thanks to those alert citizens who contacted police in a timely fashion providing valuable information to our investigators as this event unfolded, resulting in the arrests made, stated Acting Insp. Tait. These witness reports had a direct impact on our ability to take these individuals into custody quickly and safely. We have received great cooperation from many in the public contacting us with additional information helping us fill in some gaps, but we do need more, he added.

Investigators will be conducting a massive video-surveillance canvass from commercial properties and residential areas in a number of locations in Nanaimo. Nanaimo RCMP is seeking any information on a pearl-white 2003 Cadillac Escalade SUV, and its occupants that was believed to be in the Nanaimo area a few days prior to the event. 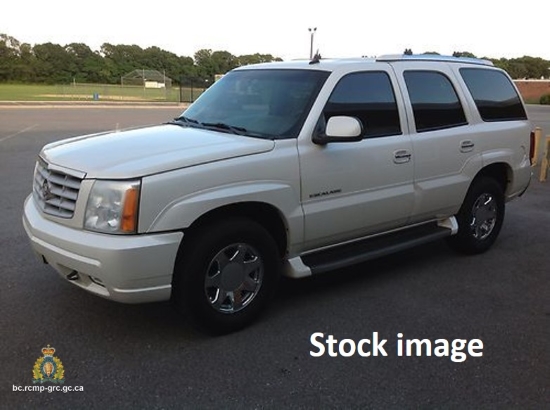 RCMP is also looking to speak to any witnesses who may have been walking or driving through the Rock City Plaza at the time of the shooting. In particular, a Caucasian woman who was seen walking towards the Jumping Jiminy’s Playground & Café.

The three suspects have been released at this time pending further investigation. These investigations are complex and we are committed to keeping Nanaimo and its citizens safe. The continued cooperation from the public is critical to have these perpetrators held accountable, adds Tait.