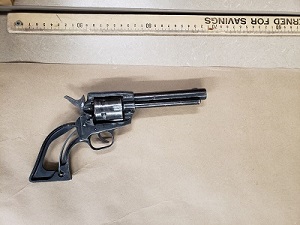 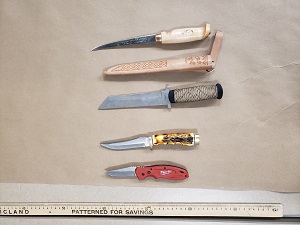 A late night check of a vehicle parked roadside, led to the discovery of a loaded revolver, numerous knives and a small quantity of suspected fentanyl. The incident occurred at approximately 2 am on Thursday April 15, 2021, in the vicinity of Ware Road and the Nanaimo Parkway.

The investigating officer was travelling south along the Parkway, when his attention was directed to the vehicle. As he approached, the officer noted that the driver was slumped over in the driver’s seat. When the officer got out of his vehicle and approached the vehicle, he saw a black revolver lying on the front passenger side floor.

The officer promptly woke the sleeping driver and arrested him for careless transportation of a restricted firearm. The firearm was later examined and found to be loaded with five .22 calibre rounds, along with one spent cartridge. There was also no locking device in place. Adjacent to the 35-year old male driver was a small quantity of suspected fentanyl, and in the backseat, a bag containing break in tools and knives.

Police later determined that the driver, 35-year old Richard Jackson of Nanaimo, was not the owner of the seized firearm and the investigation into the ownership of the firearm is continuing.
Jackson was later remanded into police custody and charged with multiple firearm offences, Possession of a Controlled Substance (fentanyl) and several Breach of Undertaking charges, in relation to the break in tools and the firearm located.

Jackson is scheduled to make his next appearance in Nanaimo Provincial court by way of video conferencing on Tuesday April 20, 2021.