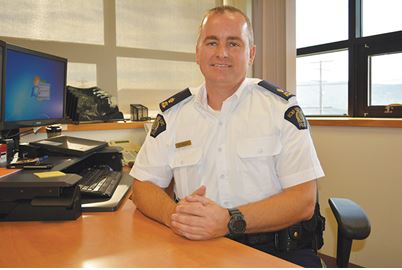 Williams Lake’s new RCMP inspector is no stranger to the region.

Insp. Jeff Pelley grew up in Cache Creek, B.C, and became the district staff sergeant for the Cariboo Chilcotin Region in December of 2014.

He replaces Insp. Milo MacDonald who resigned two weeks ago and accepted a position as the City of Williams Lake’s chief administrative officer.


During an interview with the Tribune Tuesday he said he has been with the RCMP since 1999 and started his career with the Prince Rupert detachment, followed by postings in Kamloops, Kelowna, 100 Mile House and New Hazelton.

As a young teenager I met RCMP members from Cache Creek and Ashcroft that were quite impressionable, Pelley said of why he was inspired to become a police officer.

After high school he studied trades at the University College of the Cariboo for two years.
He shifted into a Bachelor of Arts program, but before it was completed the RCMP called him up to join.

I like the challenges of addressing community issues and working with the members, Pelley said of why he enjoys policing. I wanted specifically to remain here — I have some connection to the community and have been involved in some community initiatives with Insp. MacDonald and community safety manager Dave Dickson.

Impressed by the hardworking membership of the local detachment and the successes they have had to date, Pelley said he is excited about joining the team full time and being able to contribute where he can.
It is very admirable the successes that this detachment has had over the last year, he said.
Addressing the area’s gang problems, Pelley said he looks forward to further enhancing community safety through collaboration and the priorities involving enforcement, intervention and education with the policing team.

As for the region’s prolific offenders, it is not just about incarcerating individuals, but about their integration back into society where they can be upstanding citizens and not be involved in the criminal element, he added.

But there are prolific offenders that we certainly need to focus on with enforcement, he said. It is all about the efforts of the whole team and not myself as an individual.
There are many moving parts and I look forward to the existing success of the detachment and the strategic direction of making this community safer.

He described his management style as open, with a willingness to listen and support the police members from all levels in a collaborative effort.

Williams Lake has many young police officers and Pelley said it reminds him of his first posting in Prince Rupert.

The learning curve is very steep and gives them a wide range of experiences throughout the policing atmosphere right at the start as it is a very busy detachment, Pelley said. I’m thankful for having that exposure because it certainly sets a great fundamental baseline for your policing career.
His wife, Shelly [nee Gleason] Pelley, is originally from Big Lake. They have a daughter Avery, 8, and a son Greyson, 3.

Pelley enjoys watching his children’s participation in soccer, swimming and gymnastics, while the whole family loves camping, he said.

Thanks to Monica Lamb-Yorski, reporter for the WLTribune for photo and story