Between August 12 to 15, 2021 members of BC Highway Patrol (BCHP) from Dawson Creek and Fort St. John conducted four nights of proactive enforcement and public education on the highways in and around the city of Dawson Creek, BC.

The Alexa’s Bus program was borne from tragedy which led to a collaborative effort between government, police, communities and the Middelaer family whose 4-year old daughter Alexa was killed by an impaired driver as she stood beside a road feeding a horse in 2008. The bus serves four purposes- Enforcement, Education, Awareness and as a Mobile Command Post. 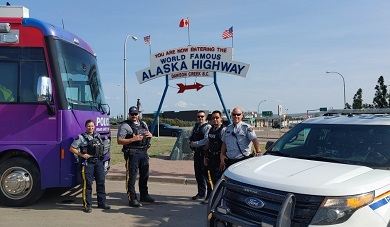 In addition, BCHP members assisted the Dawson Creek RCMP with locating a missing child, locating and transporting an intoxicated male reportedly causing mischief in the community and performed red serge duty in the exhibition parade. Members also conducted proactive foot patrols throughout the rodeo grounds during the weekend.

All told, this was a very successful and productive weekend for our officers, says Sergeant Andrew West, Unit Commander of BCHP in Fort St. John. We enjoy working with local Detachments at events like this and showcasing what we do for the community.

Here is a highlight of the enforcement efforts:

The strategic objective of BC Highway Patrol is to work closely with our road safety partners, government and the public to make the roads of British Columbia the safest in the world. Our primary enforcement targets are those driving behaviors that cause roadway fatalities and serious injuries including: