Good luck was not in the cards last Friday afternoon (August 13th) for one driver stopped by BC Highway Patrol on Highway 1 near Popkum.

An officer with BCHP was conducting speed enforcement when a westbound vehicle was observed approaching at high speed. Using his trusted laser instrument, the officer obtained a reading of 181 km/h in the posted 100 km/h speed zone.

The vehicle, a yellow Nissan GT-R, was pulled over and the officer proceeded to complete an excessive speed ticket ($483 + 3 points), a second ticket for driving without due care ($368 + 6 points) and the vehicle was impounded for seven days. 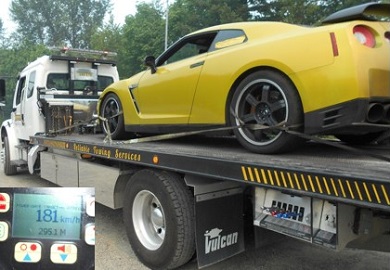 While he was roadside with the vehicle, numerous motorists drove past and honked their horns and gave the officer a thumbs up which is generally a good indication that the driver of the offending vehicle had upset other drivers. One driver stopped to report that he had called 911 on the offending vehicle due to the manner in which it was being driven and even provided his dashboard camera video as evidence.

The actions of this driver, had he not been stopped, may have resulted in a serious crash involving innocent motorists. BC Highway Patrol thanks those that took a moment to acknowledge the officer for doing his job and for going the distance to call 911 and provide additional evidence to aid the investigation.

The mandate of BC Highway Patrol is to conduct enforcement of driving behaviours that cause serious injury and fatal collisions including: High Risk Driving/Speeding, Distracted Driving, Impaired Driving, Intersections and Occupant Restraints. BCHP works closely with many road safety partners, government agencies and the public in its effort to make our highways safer together.