On July 26, 2020 at approximately 12:15 AM, an officer with the Integrated Road Safety Unit in Kamloops stopped a commercial vehicle on Highway 1, east of the city, for a traffic infraction.

The officer noted some discrepancies with the driver’s log book, a bill of lading was not produced and the driver could not open the trailer as required by the Commercial Transport Act to ensure load securement. Based on that and other observations, the officer developed grounds to suspect the driver was transporting contraband and entered into a Controlled Drugs and Substances investigation, detaining the driver for that purpose.

The officer engaged a member of the Roving Traffic Unit and his Specialty Police Service Dog which was deployed and indicated to the odour of drugs the dog is trained to detect. The driver, a man in his fifties from Surrey, was arrested. During the subsequent search of the commercial vehicle, a large amount of Canadian currency was located, estimated at the time to be approximately $800,000. No other contraband was found. 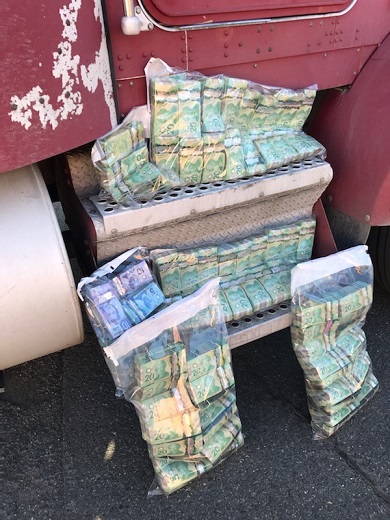 The truck and trailer were seized, and the driver was later released on conditions with a charge of Possession of Proceeds of Crime expected to be laid in the near future. The currency was transported and secured at an undisclosed location and was found to total $840, 565.00.

This incident demonstrates how a vehicle stop for a seemingly minor offence can quickly turn into an investigation resulting in a significant seizure of contraband and serious criminal charges. This is but one example of the work that officers from BC RCMP Traffic Services do every day across the province to disrupt criminal activity and keep our highways safe for all motorists.