On December 1, 2022 at 4:40 PM, a person came by the RCMP Detachment in Grand Forks to turn in some firearms and ammunition that they did not want. Unfortunately, also present was a realistic looking grenade. This grenade was immediately seized and safely secured and stored. After a consultation with the RCMP Explosive Disposal Unit (EDU) it was determined that the grenade appeared military and a referral was made to the Canadian Armed Forces. After sending pictures to the Explosive Ordinance Disposal Unit (EDO) of the Canadian military, they felt it was warranted for their attendance. On December 2 in the midafternoon, EDO members attended, confirmed that the grenade was in fact real and not inert. The grenade was subsequently seized and disposed of.

Often, when people are cleaning out a family members home they come across firearms and other weapons. These items should never be transported and brought to a detachment, rather call the police to report this and an officer will attend and seize these items.

This was a potentially scary incident in what was later confirmed to be a live grenade brought to the detachment, stated Detachment Commander Sergeant Darryl Peppler. We are trained to treat all firearms and other weapons as live, and this is a good example as to why we do that. 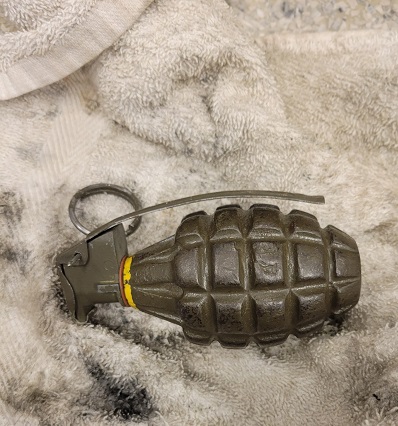 The first was at 11 PM when officers stopped a Subaru XV on Riverside Drive at 78th Ave. After speaking with the driver, the officer administered a roadside breath test. The driver, a 38-year-old man from Grand Forks, provided a sample of breath that resulted in a 24 hour driving prohibition being issued.

Less than an hour later, just before midnight, officers noted a vehicle speeding in the downtown core and stopped a Buick Rendezvous. The driver, a 38-year-old woman from Grand Forks exhibited signs of impairment and officers began their impaired driving investigation. The woman refused to comply with the lawful demands to provide a sample of breath and is now facing criminal charges of Refusal to Comply. The driver will appear in Provincial Court on January 9, 2023.

On December 4 at 1:30 AM officers stopped a Jeep Cherokee on 2nd St at 69th Ave in Grand Forks. After a quick conversation with the driver, officers entered into an impaired driving investigation where a 28-year-old man from Grand Forks provided a sample of breath roadside. The result was a fail meaning the man had over the legal limit of alcohol in his system. The driver was issued a 90-day driving prohibition and had his vehicle impounded for 30 days.

It is becoming clear that many are not getting the message about the dangers of drinking and driving, stated Sgt Darryl Peppler. We will be stepping up enforcement throughout the holiday season to ensure it’s a safe one, for everyone.