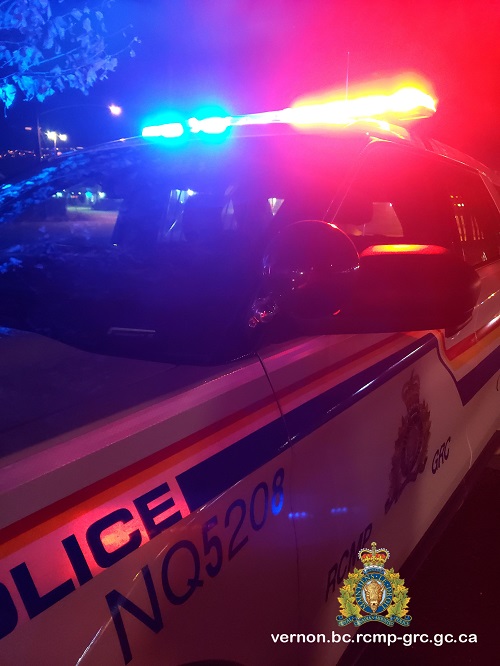 On Saturday, November 19, 2022, at approximately 11 p.m., police conducted a traffic stop with a vehicle near the intersection of 32nd St and 32nd Ave in Vernon. While interacting with the driver, the investigating officer formed the suspicion that the man’s ability to drive a motor vehicle was impacted by alcohol. After being read a demand, the man refused to provide a sample of his breath. The driver, a 32-year old Kamloops man was issued a 90-day Immediate Roadside Prohibition and his vehicle was impounded for 30 days.

On Sunday, November 20th, 2022 around 12:45 a.m., a frontline officer conducted a traffic stop with a vehicle on Coldstream Ave in Vernon. The man operating the vehicle was read a demand to provide a sample of his breath after the officer noticed several signs of alcohol impairment. The driver, a 33-year old Salmon Arm man provided a sample of his breath that registered Fail on a roadside screening device. As a result, he was issued a 90-day Immediate Roadside Prohibition and his vehicle impounded for 30 days.

At approximately 1:30 a.m., police conducted a check of a vehicle driving in the 2800-block of 30th Avenue. Shortly after stopping the vehicle, the officer entered into an impaired driving investigation. A breath test administered using a roadside screening device resulted in the 20-year old Vernon man being issued a 3-day driving prohibition under the BC Motor Vehicle Act.

Around 2 a.m., on Sunday, November 20th, 2022, police stopped a vehicle near the intersection of 35th St and 29th Ave after it was observed committing a traffic offence. The investigator suspected the driver’s ability to operate his vehicle was impaired by alcohol and a breath test was administered using a roadside screening device, the result of which was Fail. The 52-year old Vernon man was issued a 90-day driving prohibition under the BC Motor Vehicle Act and the vehicle was impounded for 30 days.

Impaired driving puts everyone at risk and there’s zero tolerance for it, states Constable Chris Terleski, Media Relations Officer for the Vernon North Okanagan RCMP. We will continue to target and remove impaired drivers through enforcement activities, but the reality is that everyone has an important role to play in keeping our roads safe. It starts by making good choices before you get behind the wheel of a vehicle. If you are going to drink, plan ahead to have a safe, sober ride home and do not drive impaired.