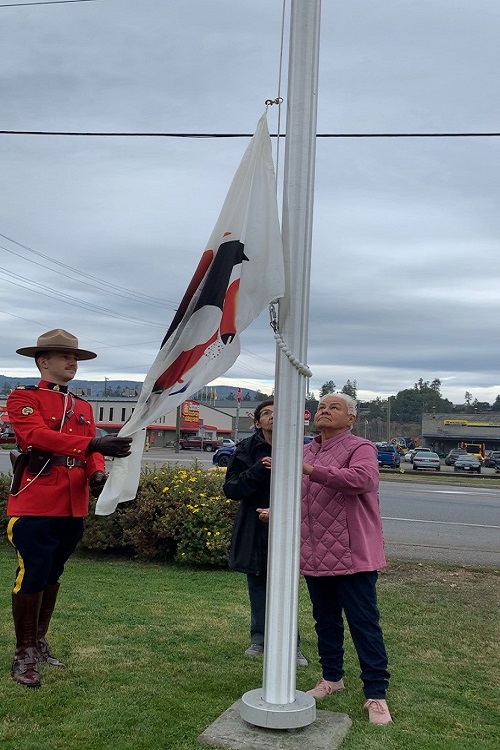 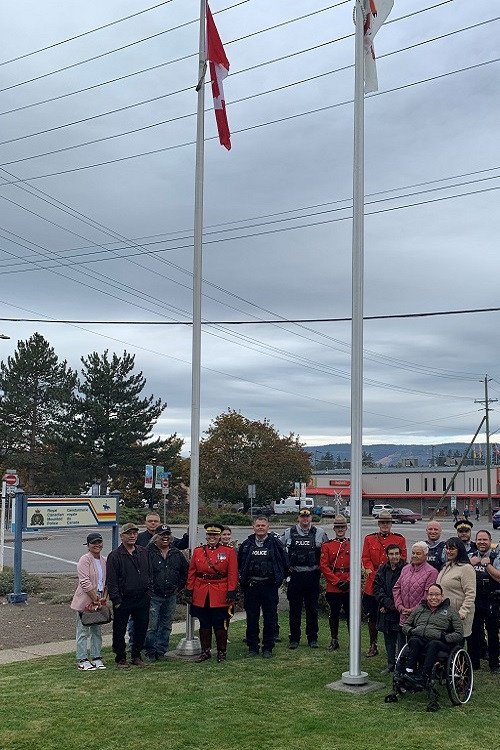 On Thursday, October 20th, 2022, the Okanagan Nation flag was raised by OKIB elders Penny Lawrence and Joanne Louis directly beside the Canadian flag at the Armstrong office of the Vernon North Okanagan RCMP. In addition to the flag, a land recognition plaque, written in Okanagan language, English, and French was also unveiled at the entrance to the building. The plaque works to acknowledge that the site of the Detachment is located on the traditional syilx territory of the Okanagan peoples. 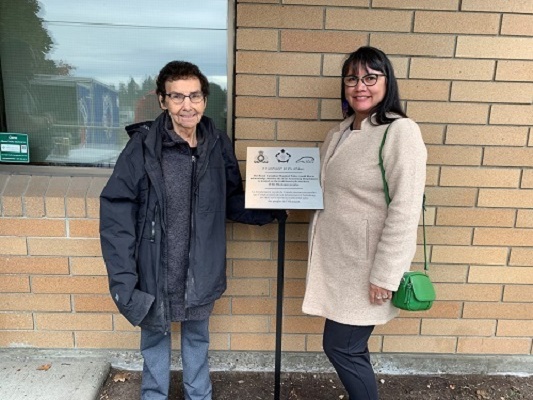 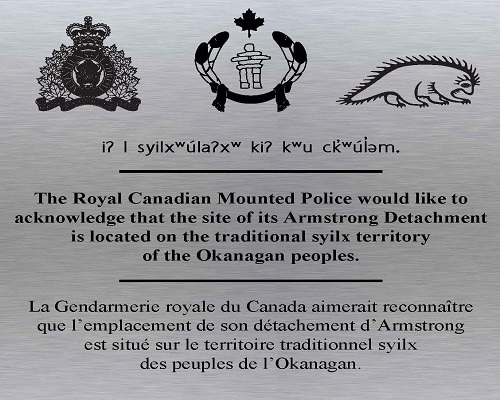 We are proud to instill this plaque and raise the Okanagan Indian Band flag at our Armstrong office, states Superintendent Shawna Baher, Officer in Charge for the Vernon North Okanagan RCMP. This act toward reconciliation supports what we are working every day to achieve; strong, healthy, sustainable relationships with our Indigenous communities.

Collaboration on the project began back In September of 2020 and was spearheaded by Constable Kyle Camalush of the Vernon North Okanagan RCMP’s Indigenous Policing Services.

As a liaison, I have the unique opportunity to work closely alongside the OKIB community, states Cst Camalush. I’ve learned a great deal in my time here and have made it a priority to share this knowledge with my colleagues to foster a better understanding of local culture and traditions. In September of 2020, I engaged in discussions with the OKIB as well as local RCMP management and proposed the idea of a land recognition initiative at the Armstrong RCMP Detachment. With funding support and through much collaboration with the OKIB, a flagpole, locally developed art piece and land recognition plaque have been permanently mounted at the Armstrong Detachment. I was fortunate to work with Savannah Louis, who is in the fourth year of her Bachelor of Language Fluency Degree at UBCO, to ensure that this statement was accurately and primarily recorded in Okanagan language. Limləmt, Savannah!

The local art piece was developed by Tessa Louis and will illustrate the RCMP’s valued and dedicated relationship with the Okanagan Indian Band as we both continue to work collaboratively together. The artwork will be unveiled in a separate ceremony at a later date.