Shoplifter arrested on 9 warrants with a loaded car

On September 6, 2022, at about 6:00 pm, while conducting proactive patrols in the parking lot of large department store in West Kelowna, a police officer recognised a prolific shoplifter wanted on several warrants. The police officer observed the suspect loading stolen merchandise into his vehicle and arrested him at the scene. While investigating further, the police officer recovered an excessive amounts of items stolen by the suspect within the previous two hours from three other different local businesses. 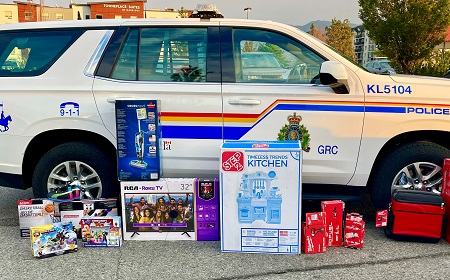 "This suspect was identified as a priority by our detachment as he was responsible for stealing thousands of dollars’ worth of electronics and tools from our local merchants, said Corporal Judith Bertrand, Media Relation Officer for the West Kelowna RCMP.

The West Kelowna RCMP requested warrants for his arrest in June and July 2022 as a result of other significant thefts.

"The West Kelowna RCMP will continue to work closely with the Lost Prevention Officer working in these businesses to collect the best evidence and to ensure that these offenders accountable for their actions, said Corporal Judith Bertrand

The RCMP will be requesting that the suspect be remanded into custody when he appears in court on September 7, 2022.

This is a great example of proactive policing by the West Kelowna Detachment members. The membership takes the time to know who the prolific offenders are in their area, and it paid off in this case, added Staff Sergeant Loi Ly, the BC RCMP Duty Officer.