One man arrested after three hour drunken joyride across the Rockies.

An impaired Alberta man was arrested after a 3 hour reckless and dangerous trip through the BC Rocky Mountains.

On October 28, 2022, at 07:49 a.m., Kamloops RCMP responded to a call of an erratic vehicle eastbound on Highway 1. The vehicle was described as a newer-model white F150, with bright headlights, black bars lining the box, and an Alberta licence plate. RCMP received a multitude of calls regarding this vehicle as it travelled from Kamloops to Golden along Highway 1. Some reported it speeding, some reported it passing illegally, and others reported it tailgating dangerously. At one point, a police officer witnessed the F150 travelling 135 km/h in a 50 km/h zone. Further along the highway, another police officer clocked the driver doing 118 km/h in a 60 km/h zone.

After multiple attempts to pull the vehicle over, RCMP finally caused the F150 to stop with the help of their dedicated Emergency Response Team (ERT). Police were able to set up a roadblock near the Quartz Creek snowmobile recreation site. The driver was uncooperative upon being stopped but was eventually taken into custody. Police determined the driver was well over the legal limit of alcohol in his body at the time. The vehicle belonged to the driver and was registered and insured. He was served a 90-day Administrative Driving Prohibition and his vehicle was seized pending a Search Warrant before he was released on an Appearance Notice to appear in Provincial Court on multiple charges.

Sgt. Brad Matchett, the NCO in charge of the BC Highway Patrol – Golden unit said, This kind of driving behaviour is simply unacceptable. In addition to the risk posed to police attempting to stop this driver, he put so many other people’s lives at risk. 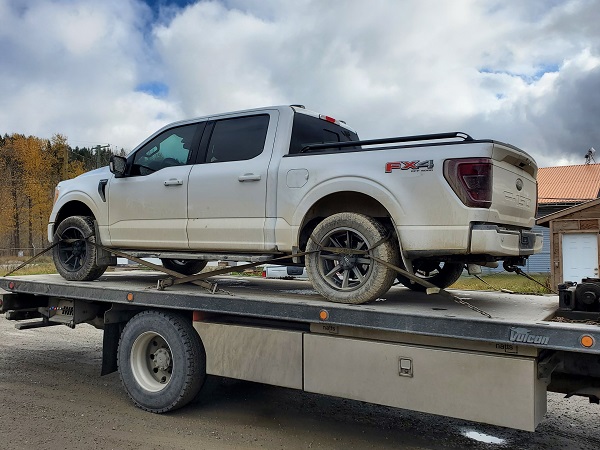 View a larger version of the suspect vehicle.