RCMP search leads to seizure of firearms, weapons and ammunition 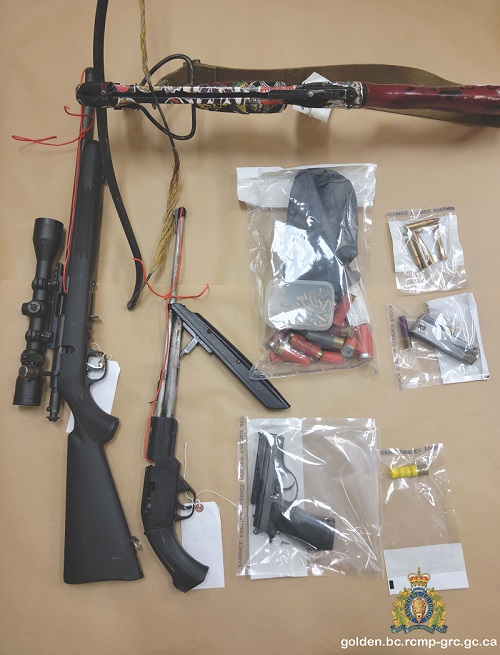 Link to larger image of seized weapons and ammunition

A 35-year-old man has been arrested following a robbery with a firearm investigation in Golden, BC.

On October 28, 2022 at approximately 7 a.m., members of the Golden-Field RCMP Detachment, the Southeast District Emergency Response Team (ERT) and Police Dog Services (PDS) executed a search warrant at a residence on Moberly School Rd as part an investigation into a string of robberies involving firearms in Golden on October 26, 2022.

During the search, police seized a hunting rifle, two replica firearms, a crossbow and various ammunition. One man was arrested at the scene.

The man is being held in custody and is currently facing charges of robbery, theft and assault.

With our partners, we were able to seize potentially deadly weapons and firearms, and intervene to prevent acts of violence from impacting the Golden community, states Constable Robyn Diddams, the lead investigator on this Golden-Field RCMP file.

The public plays an important role in helping to reduce, prevent and solve crime, including the possession of illegal firearms and drugs. Anyone with information about, or who suspects, illegal activity in their neighbourhood is asked to contact their local police. Information can also be provided anonymously through Crime Stoppers at 1-800-222-TIPS (8477).