Oceanside RCMP and Parkville Fire Department were alerted to a structure fire early this morning in downtown Parksville which police believe was deliberately set. 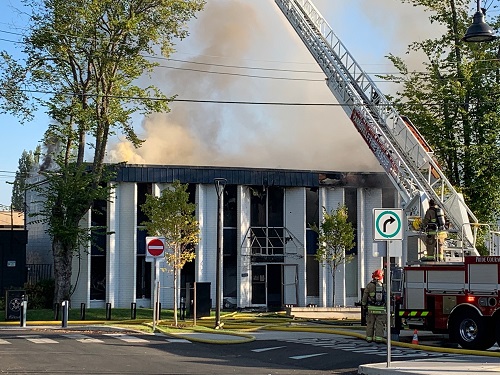 On September 22, 2022 at approximately 6:00 a.m. a structure fire was reported in the 100 block of Memorial Avenue in downtown Parksville. The fire was determined to be originating from a commercial building which was, at the time, unoccupied. Damage to the interior and exterior of the building is extensive. No injuries have been reported.

Preliminary investigation has determined the fire was deliberately set at the rear exterior of the building. Oceanside RCMP General Investigation Section and an RCMP fire investigator are currently on scene continuing to collect evidence.

If anyone has any information about this fire or has dash cam or video surveillance from the area around 6:00 a.m. this morning, investigators would like to speak with you, says Sergeant Shane Worth. Fire crews and police are still working in the area and the public is asked to respect the temporary closures and barriers that are currently in place.