On July 28 a man reported he heard a loud noise outside his house in the 9000 block of Hwy 12, and then saw a puff of smoke behind a residence across the road. Initial police investigation revealed a man in a white van shoot what appeared to be a flare gun into the hillside then leave the area. The file is under further investigation. Anyone with information regarding this incident is asked to contact Lillooet RCMP, please reference Lillooet RCMP file 2022-1543.

On July 29 at 3pm, Lillooet RCMP attended Downton Park for a report of a fight. All parties located in the park denied any knowledge of a fight. Police located an intoxicated man across the road the appeared to have been punched in the mouth. The man refused to provide information about being assaulted. He was arrested for being intoxicated in public, and subsequently transported to Lillooet cells to sober up.

On July 29, a woman attended the Lillooet RCMP detachment and reported a counterfeit $10 bill had been passed at a local restaurant. Despite having video footage in the restaurant, it was unknown when the bill was passed. The bill was seized by police and mailed to the National Anti-Counterfeiting Bureau for further examination.

On July 31 at 2pm Lillooet RCMP were patrolling and observed a man known to be unlicensed driving a vehicle. Police stopped the vehicle and confirmed the driver’s identity. The driver was served a driving prohibition notice; the vehicle was impounded for 7 days.

On August 1 at 9pm a woman reported a man sleeping on a porch of an unoccupied residence on McEwen Rd. Police attended and located the man who stated he was homeless and was just trying to get out of the heat. The man stated he had a dog so the homeless shelter was not an option for him. The man departed the area without further issue.

On August 3, a man reported that 30 pieces of steel crowd control fencing were stolen from 900 block of Moha Rd. The fencing was left unsecured and was last seen there about two weeks prior. Anyone with information regarding this incident is asked to contact Lillooet RCMP, please reference Lillooet RCMP file 2022-1599.

On August 5, a woman reported two men fighting at Downton Park. Police attended immediately and observed about 12 people in the park, however everyone denied participating or seeing a fight. The complainant did not know who the males were. Police poured out open alcohol observed. Police subsequently escorted one man home to avoid future conflict, who was believed to be involved in an altercation despite denying it.

On August 8 at 2am, police were on patrol and stopped at vehicle for an unrelated matter. During the investigation police observed open alcohol inside the vehicle. The driver was given a breath demand and blew two results of WARN. A three day immediate roadside prohibition was served to the male, prohibiting him from driving for three days. The matter was referred to RoadSafetyBC.

On August 8 at 3pm, police patrolled Downtown Park for open alcohol and public intoxication. A small group of people was observed, no one appeared intoxicated but two cans of open beer were observed. The beer was poured out. Police continue to monitor Downton Park. 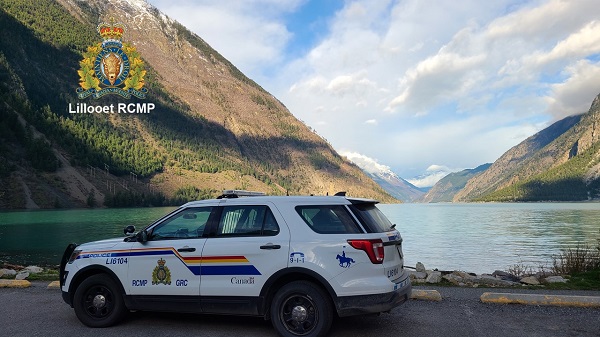 Police vehicle with view of Seton Lake in the background.