Intoxicated in public
On June 2 at 6pm, a man reported a group of three drinking alcohol on a bench near the playground at the Lillooet Rec Centre. Lillooet RCMP attended and located three heavily intoxicated individuals who were all unable to care for themselves. All three were arrested and transported to Lillooet cells to safely sober up.

Intoxicated in public
On June 4 at 4:30pm, a woman reported an intoxicated man inside the washroom at a local gas station. Police attended and located a man known to police, passed out on the washroom floor. Once awoken, it was clear the man was heavily intoxicated, who was then transported to Lillooet cells to sober up.

Suspicious circumstances
On June 5 at 4pm a man reported that his vehicle was recently towed by a company based in the lower mainland, and believed his vehicle was tampered with. The man claimed he was dating the tow truck driver’s boss’ ex-girlfriend, and alleged that the tow driver burnt the air filter on the vehicle, causing the vehicle to burn. The complainant called Lillooet RCMP an hour later and then claimed that his roommate had admitted to putting sugar in his fuel tank, which caused the vehicle to catch fire and burn. The allegations were not adding up. When queried for further details the complainant was unable to elaborate and sounded intoxicated. Lillooet RCMP referred the man to ICBC, and to the complainant’s local police force where the offence allegedly took place.

Breach
On June 6 at 12am Lillooet RCMP responded to reports of an intoxicated man yelling on Fraserview St. Police attended and located a intoxicated man. Police arrested the man for public intoxication, locating bear spray and a large double sided knife in his possession. Further investigation showed the man to be on conditions to not possess weapons, and prohibited from consuming alcohol in public. The man was transported to Lillooet cells. Lillooet RCMP worked with Community Corrections probation officer in forwarding a fail to comply with conditions charge against the man for breaching his conditions.

Theft
On June 7 a man reported monitoring equipment was stolen from the west side of the Fraser River near the Big Bar slide area off West Pavilion Rd. The theft occurred on May 7 between 11am-12pm and included a solar panel, and green hardcase with industrial batteries. The complainant was able to provide video of the theft, which depicts two males taking the equipment. The file is under further investigation. Anyone with information regarding this incident is asked to contact Lillooet RCMP, please reference Lillooet RCMP file 2022-1099. Anonymous tips can be provided to CrimeStoppers at 1-800-222-8477. 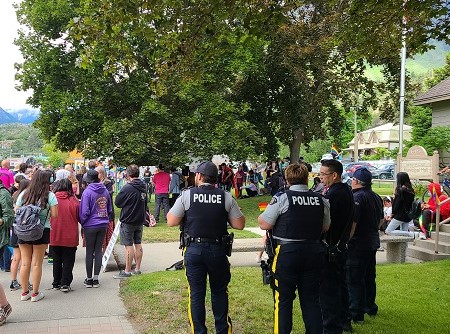 Lillooet RCMP members with parade participants, at the Lillooet Pride parade on June 8, 2022.