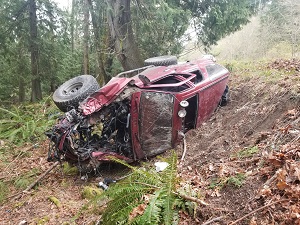 The collision was so severe that it caused the engine of the vehicle to be torn from the chassis. Witnesses reported the vehicle was being driven in an unsafe manner prior to the collision. Salt Spring RCMP, B.C. Ambulance Service, and Salt Spring Fire Department all responded to the incident. A man located at the scene was identified by witnesses as the driver, whom was believed to be intoxicated. Officers detained the driver while they assessed the scene and initiated a criminal investigation. Shortly after arriving on scene, officers learned that the driver had outstanding warrants for his arrest, was prohibited from driving, and believed that his ability to operate a motor vehicle was impaired by alcohol. The man resisted arrest and required three officers to safely arrest him.

Serious incidents such as this can greatly impact those directly involved in the collision as well as First Responders, says Sgt. Clive Seabrook of the Salt Spring RCMP. We would like to thank Salt Spring residents for your unwavering community support as we supported our officers in this difficult time.

The Independent Investigation Office of British Columbia (IIO BC) had initially been called-out to investigate as there was serious injuries to the driver. The IIO BC has since concluded their investigation as police actions did not cause the driver any harms. You can read the IIO BC concluding news release here: IIO Concludes Investigation into an Incident on Salt Spring Island (2022-061)

The investigation into the motor vehicle incident is ongoing. If you have any information about this incident, please contact the Salt Spring RCMP at 250-537-5555.