The Campbell River RCMP and other RCMP detachments are investigating an increase in the passing of counterfeit currency in Central Island communities.

Since January 1st, 2022, 23 reports of counterfeit currency being passed have been reported to the Campbell River RCMP and over 20 other reports have come in to other central island communities North of Nanaimo.

The predominant denominations of counterfeit currency tend to be $50 bills and $100 bills and it seems that the artists and bill passers are taking advantage of a lack of training for clerks in identifying counterfeit bills.

Part of one of the fraudulent  Frontier Series $100 notes has been included below for reference. Upon quick examination it's easy to see that no hologram pictures exist as it is merely tape over tin foil. 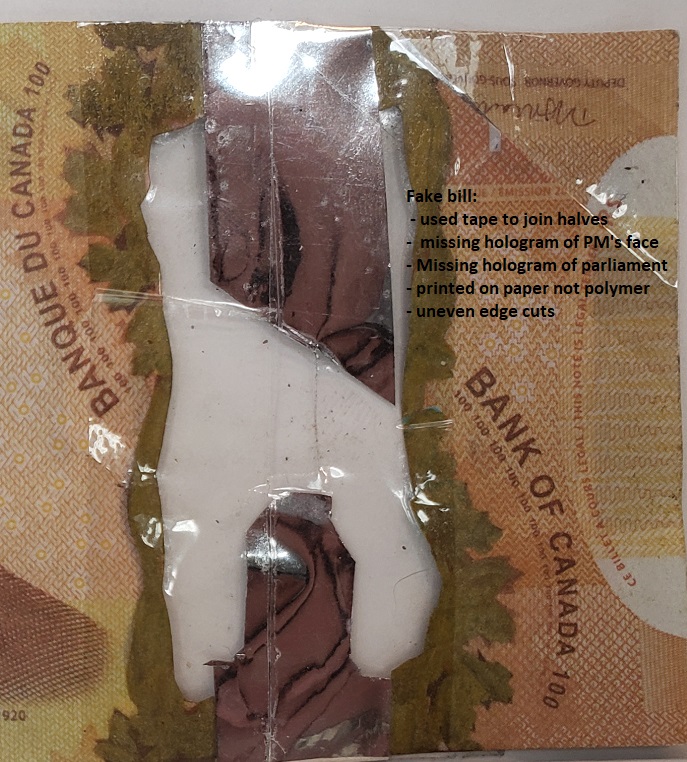 It's unfortunate, said Cst. Maury Tyre, because the training tools to identify counterfeit bills are readily available on the Bank of Canada  website and most counterfeit bills are easily identifiable if people know what they're looking for. With the bulk of transactions being done electronically, it seems there is less focus in most retail locales on the identification of counterfeits and it's allowed unscrupulous characters to pass these bills at a substantial loss to retailers.

In general, employee training can protect businesses from being taken advantage of by counterfeiters, however aside from training to identify counterfeit bills, there are other concepts which can prevent the passing of counterfeits:

If you wish to know more about counterfeit prevention please visit the Bank of Canada website or contact the Campbell River RCMP at 250-286-6221.