On March 30, 2022 an officer with BC Highway Patrol Smithers stopped a vehicle for speeding on Highway 16 west of the Kitwanga Junction in New Hazelton, BC. Upon speaking with the occupants, a man and woman from Alberta, the officer formed the belief that the pair was in possession of a Controlled Substance.

The pair was arrested and the vehicle was searched. The officer located several cell phones, approximately 80 grams of cannabis, and a plastic bag of apparent Canadian currency estimated to be approximately $100,000. 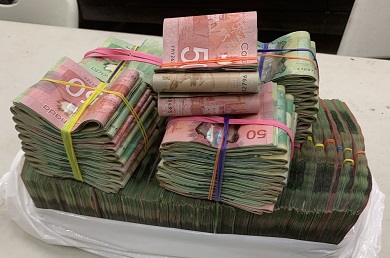 The female passenger, a woman in her twenties, was later released on an Appearance Notice, while the driver, a man in his twenties and known to police in western Canada, was served tickets for speeding and operating a vehicle with cannabis in it contrary to the Cannabis Control and Licencing Act (BC). In addition, the driver was served with an Appearance Notice in relation to the proposed criminal charge of Possession for the Purpose of Trafficking.

Officers with BC Highway Patrol do much more than simply write tickets. Many are expert collision investigators and impaired driving investigators and they are also on the look out for traveling criminals. In this instance, stopping a vehicle for speeding yielded a large cash seizure of suspected drug money and disrupting criminal activity is yet another way BC Highway Patrol is making our highways safer together.

Anyone with information regarding criminal activity may call their local police or, if you wish to remain anonymous, call Crimestoppers at 1-800-222-8477.