On February 9, 2022 at approximately 11:00 AM, an officer with BC Highway Patrol in Smithers stopped a vehicle for speeding on Highway 16 near Witset, BC.

Upon speaking with the driver, police observed drugs and drug paraphernalia in plain view in the vehicle. The driver, a man in his thirties from the Terrace area, was arrested and provided his Charter Rights. Upon searching the driver, evidence of drug trafficking was found, including a large quantity of cash and drugs believed to be cocaine and methamphetamine. The vehicle was searched incidental to arrest and more evidence was located including a loaded handgun. 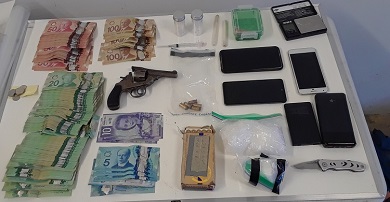 In all, approximately $12,000 CND in cash, drugs, cell phones, a loaded gun and ammunition were seized as a result of the traffic stop. The driver, who is well known to police, is facing numerous charges stemming from this incident and was found to be in breach of several Court-ordered conditions, one of which was a firearms ban.

The file remains under investigation by BC Highway Patrol in Smithers. The driver was ticketed for the traffic violations and released on an Undertaking to appear in Court at a later date. The vehicle was towed to a secure location.

Officers with BC Highway Patrol always expect the unexpected when they pull someone over for a traffic offence, says Cpl. Kevin Weeres, Unit Commander for BCHP in Smithers. Anytime drugs, weapons and cash are involved in a traffic stop, there is added risk to the officers. They did an excellent job to minimize risks, safely take the driver into custody and get drugs and weapons off the street. This is another example of how BC Highway Patrol is making our highways safer together.