Between October 22 and November 22 2021, the Hudson’s Hope RCMP responded to 28 calls for service.

A traffic stop conducted on October 26, 2021 resulted in an impaired driving investigation. The driver provided samples of their breath and was found to have consumed alcohol. The driver was subsequently issued a three-day driving prohibition. (2021-393)

On October 27, 2021, the Hudson’s Hope RCMP received a report of a possible impaired driver. The vehicle was located on Canyon Drive and the driver was found to have consumed liquor. The driver was released on a future court date to answer to the charge of impaired operation of a conveyance. (2021-394)

While conducting speed enforcement on November 3, 2021 in the School zone on Beattie Drive, a driver was stopped for speeding. The driver was found to be travelling at 47 km/h above the posted school zone speed limit. As a result, a violation ticket was issued for excessive speed. (2021-400)

The Hudson’s Hope RCMP were advised of a battery theft that had occurred in a construction site on Highway 29 on or about November 8, 2021. The batteries were removed from a Sign board that was being utilized to warn traffic of an upcoming construction project. Having this notice not available, created a large traffic safety hazard as it warned motorists of the large construction area coming up. If anyone has any dash cam or information to this theft, please contact the Hudson’s Hope RCMP at 250-783-5241 and cite file 2021-401.

Between the dates of November 5 and November 8, 2021 a large piece of construction equipment that was parked at a construction site along Farrell Creek road had been broken into. Electronics and maintenance tools were removed from the piece of equipment. (2021-402)

Another day of conducting stationary RADAR enforcement in the school zone along Beattie Drive in Hudson’s Hope located another vehicle travelling at an excessive speed on November 10. The school zone in this area is known for people to be traveling quickly and a vehicle was found to be travelling 43 km/h over the posted school zone speed limit. This resulted in a traffic stop and an excessive speeding ticket being issued to the driver. (2021-406) 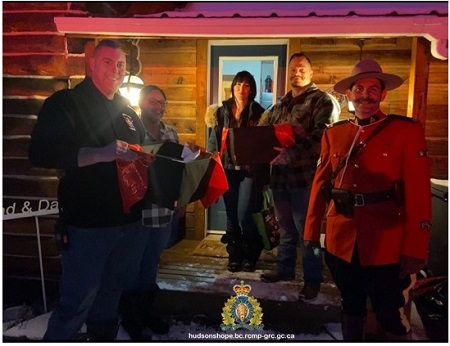