The Campbell River RCMP had responded to 14,623 files as of the end of business on October 21st, 2021. That means the pace at which files have been stacking up in Campbell River is finally starting to slow compared to 2020 although the local detachment is still well over 2020's file count for the same day.

After exhausting other efforts for identification, the Campbell River RCMP are seeking the public's assistance in identifying the individuals in surveillance footage from Walmart on September 25th, 2021. We hope that in determining their identity we can  speak to them and get information to further an ongoing investigation. 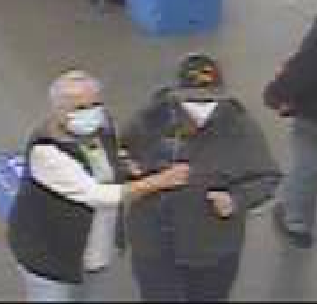 The Man in the hat is described as:

The Female was described as:

It is our hope that someone in the community may recognize this pair as neighbours, friends, or family members, said Cst Maury Tyre. We are not in the position to release the full nature of the ongoing investigation at this time and we would ask that the public refrain from making any snap judgements about the individuals in the photo as the intent is not to embarrass or scare anyone.

A news article recently cited ongoing vandalism issues in the City of Campbell River specific to a neighbourhood south of Hilchey in Campbell River.

Sadly vandalism is a far more prevalent problem in Campbell River than a lot of individuals in the community would believe and there are simply not enough policing bodies to stake out the communities' parks, neighbourhoods and construction sites that are being effected by vandals.

Some comments, when police talk about vandalism are often defensive of the mischief makers claiming that, "hey we were all young and stupid once."

Absolutely, we were all young and stupid once, admitted Cst Maury Tyre. However, when we were foolish, we were held to account by our parents or guardians and that's how we learnt not to disrespect other people and their homes or belongings. Right now the bulk of the vandalism and mischief is being conducted by teens and we know it's teens. They are being caught on video and sometimes in the act by police. When they're caught it falls largely on the parents to use that moment as a teaching experience.

In September 2021, a group of teens between the ages of 13 and 15 were drunk behind the new Campbell River Soccer Field House and chose to break the siding on the building for no apparent reason.

Please know that many of these incidents are still under investigation and police continue to receive video and witness evidence that leads us to the guilty parties. It's simply too much stress to live daily wondering is today the police are gonna knock on the door, said Cst Tyre. It's simply far less stressful to just not wreck other people's belongings

What's the big deal? The actions are disconnected with the fact that there are very real victims at the end of many of these mischievous acts, which for the teens are just for fun or on a Tik Tok dare. Blowing out someone's window could mean they can't put food on their table for a month because they have to fix that window, or maybe it was a small child's window or a lonely widower that will be effected for years to come. Maybe the people whose property is being damaged are just one small step away from a nervous breakdown and their yard and yard work is the one thing they can have control over and the damage to their yard is the final straw.

Parents, Guardians, please take the time to sit down with your kids and talk about what's going on in the community and what is acceptable and what is not. Everyone of us is capable of making foolish mistakes, what would make us inclined to believe our kids would not do the same, it's our job to teach them better. The reality is nobody wants their belongings destroyed and as nice as police can be, most of us don't want cop cars and officers at our doors unannounced with our kids in cuffs, because there's never a good knock on the door after 2:00 am.

If you have information regarding criminal activity or wish to report a crime, please contact the Campbell River RCMP at 250-286-6221 or in an emergency call 911.