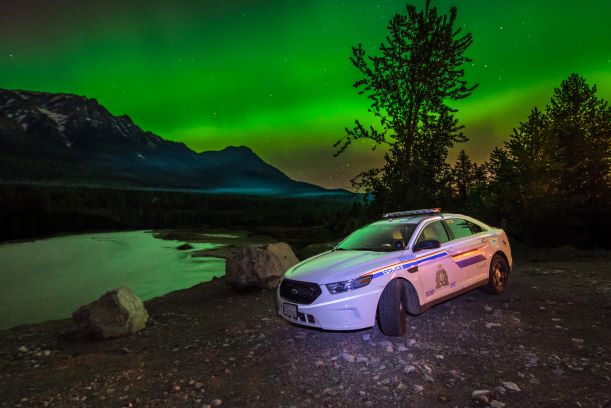 View larger image: RCMP patrol car next to lake with northern lights in the night sky;

On January 4, 2021, a sharp-eyed Officer passed a small black car without front or rear license plates while patrolling along Douglas Fir Road. After stopping the vehicle and speaking with the male driver, learned that he did had no proper identification or insurance papers for the vehicle. After much prompting, the male provided a name which lead the Officer to discover that he was a prohibited driver. The driver soon left with court documentation and motor vehicle violation fines.

An East Kootenay Traffic Services Officers learned of this traffic stop and provided more information which the lead to the arrest of the male because he had provided a wrongful name and other information. The male will appear in court in early March for Identity Fraud.

Since January 15, the Elk Valley’s increase in positive COVID-19 tests generated much attention and also increased the calls to the Elk Valley RCMP for reports of non-compliance with Provincial Health Orders and the federal Quarantine Act. In this timer period, there have been approximately ten complaints ranging from shoppers not wearing masks to people socializing with too many other people inside residences and returning international travellers not quarantining at their residence. In some of these instances, the alleged offenders had moved on before officers attended the location, and in others, officers spoke with the people and provided guidance and warnings. Elk Valley RCMP officers will attempt to get voluntary compliance with the various health orders but can resort to issuing fines that range from $230 for not wearing a mask in a public indoor space to $2,300 for hosting or organizing a non-compliance event which can include one’s own home. Like much of the public, the Elk Valley RCMP have observed an increase in stress and frustration arising from the ongoing pandemic and its related health orders however there have not been any reported disturbances due to enforcement. The local Mounties have noticed that most people, by far, comply with the various health orders and regulations. Let’s keep the Elk Valley safe together.

On January 25, 2021, at 8:30 p.m. an Elk Valley RCMP Officer was patrolling near the skating rink and noticed at least 35 people on the outdoor rink. Foot patrols near the area of the benches resulted in the seizure of an unattended but opened case of beer. When the crowd was spoken to, no one claimed the beer. These public spaces are for all people, including families and children, to enjoy. Open liquor and cannabis in these spaces are not lawful nor are tolerated. In British Columbia, a person found in possession of open liquor or lit cannabis at an outdoor rink can face a fine of $230 under the Liquor Control and Licensing Act or the Cannabis Control and Licensing Act.

On January 30, 2021, at 7:00 a.m., Elk Valley RCMP responded to a single vehicle rollover approximately 5 km southeast of Sparwood on the Crowsnest Highway. Upon arrival, the lone male driver became very evasive and argumentative. He took off on foot into the treated area and ran along the Michel Creek. The male believed to be with the Freeman of the Land and he stated the only way out would be at the hands of the RCMP.

RCMP Police Dog Services (PDS) was initiated to assist with the apprehension of the male. For about four hours, RCMP maintained sporadic dialogue with the male, foot and vehicle tracking and containment, and eventually the male came out of the area where he was apprehended without incident under the Mental Health Act.

Elk Valley RCMP would like to thank the services of PDS along with the Sparwood Fire Department and Emergency Health Services who were in the area and provided their assistance.