A break and enter investigation leads Mounties to stolen property 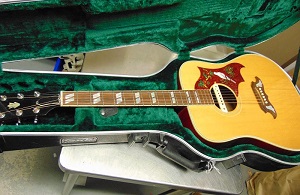 An RCMP investigation of a break and enter led police to a cache of stolen property in Surrey including a valuable guitar missing since 2018.

In the early evening of January 15, 2021 Chilliwack RCMP received a call to report a break and enter of a home in the 47000-block of Mountain Park Drive. Front line officers on scene noted the theft of electronic devices and vehicle key fobs from the ransacked home.

Chilliwack RCMP Crime Reduction Unit Property Crime (CRU) and Surrey RCMP Gang Enforcement Team also engaged in the investigation. Police promptly gathered evidence to link a person, vehicle and an apartment in the 13700-block of 107A Avenue, Surrey to the break and enter.

On January 17, 2021, thieves struck the home on Mountain Park Drive a second time stealing a family vehicle. RCMP recovered the vehicle in the 9400-block of Victor Street, Chilliwack, the same date.

In total police recovered an estimated value of over $70, 000 of property during the search, says Corporal Mike Rail spokesperson for the UFVRD. We understand the importance of every item to the owners however, a guitar seized during the execution of the search warrant provided an unexpected surprise.

In October 2018, thieves stole seven guitars belonging to the Canadian rock band 54-40 from a cube van parked over night outside of Queen’s Park Care Centre, New Westminster. During their investigation New Westminster Police Department (NWPD) recovered five of the guitars.

Chilliwack RCMP identified a Gibson Dove guitar seized during the execution of the search warrant in Surrey as the sixth missing instrument belonging to the band.

Following a thorough investigation and review of evidence, the RCMP will forward all circumstances of the investigation in a report to the BC Prosecution Service for their assessment of criminal charges.

RCMP remind everyone who witnesses anything they believe to be suspicious in nature to contact their local police or, should you wish to remain anonymous, call Crime Stoppers at 1-800-222-8477 (TIPS).