RCMP in Lillooet have recovered tens of thousands of dollars-worth of stolen items, including a tiny home that was reported as stolen in late December from the Boston Bar area.

On December 28, 2020 Boston Bar RCMP received a report of a break and enter to a property and theft of a small home stored at that property situated in the 41000-block of the Trans-Canada Highway in Boston Bar. The tiny home stolen, which measured 8 feet by 17 feet, with cedar siding and solar panels, was mounted on a flat deck trailer. 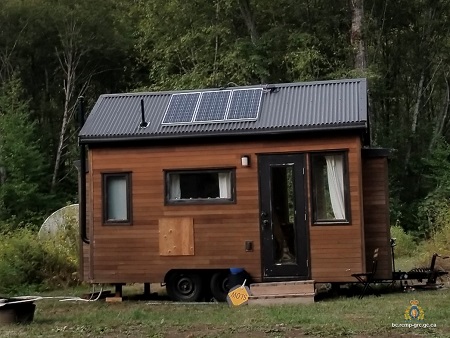 View larger image: Photo of the stolen tiny home, described as an 8x17 foot structure, with cedar siding and a grey metal roof, mounted on a trailer;

On December 31, 2020 RCMP received tip information that a suspect had allegedly attempted to sell them a tiny home, matching the description of the one taken. Front line RCMP officers responded to the property of the seller situated in the Lillooet area, instead of the potential buyer, where they located the tiny home. A man associated to the property was taken into police custody, questioned and later release pending further investigation.

On January 3, 2021 investigators with the Lillooet RCMP returned to the property in question, armed with a search warrant, said Cpl. Jesse O’Donaghey, spokesman for the BC RCMP in the Southeast District. As a result of its search, Lillooet RCMP seized additional property allegedly taken from the Boston Bar property back in December 2020. Police officers also recovered a generator reported as stolen in August 2020 from Coldstream BC in the North Okanagan.

Police estimated the total value of the stolen property recovered to be upwards of $80,000.

The investigation is active and ongoing at this time with cooperation between Lillooet RCMP, Boston Bar RCMP and Vernon North Okanagan RCMP.

The 48-year-old Lillooet man now faces numerous potential charges. He is expected to make his first appearance in Lillooet Provincial Court on March 9, 2021.