1. 2021-3093 – Theft from Business
On May 25, 2021, the Squamish RCMP received a report of a theft from a business located in the 40000 block of Tantalus Rd, Squamish, BC. The complainant reported that sometime overnight, someone had stolen a table, four chairs and had attempted to steal a portable fire pit. 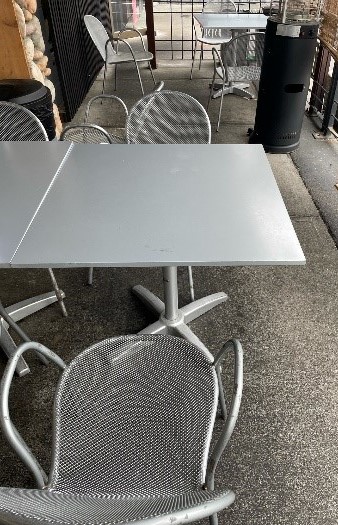 2. 2021-3096 – Damage to Tent
On May 25, 2021, the Squamish RCMP received a report of mischief over $5000, which occurred to a storage tent located in the 39000 block of Government Rd, Squamish, BC. The complainant reported that sometime between May 23, 2021 and May 25, 2021, an unknown individual flew a drone through the roof of the tent, resulting in a large tear to the tent. The individual then broke into a fenced area, went inside the tent and retrieved their drone. The damage is estimated at $200,000.

3. 2021-3159 - Arrest of Prolific Offenders
On May 28, 2021, the Squamish RCMP received a report of stolen bikes from a residence in downtown Squamish. Police conducted patrols and were able to locate the stolen bikes, as well as a large amount of copper wiring at a local illegal campsite. Police arrested three prolific offenders, two of these offenders were issued provincial violation tickets for attract dangerous wildlife under section 33.1(2) of the BC Wildlife Act and violation tickets for camping in a public place, under section 3.2(9) of the Squamish Camping Bylaw. Police are also investigating the two individuals for possession of property obtained by crime, under the Criminal Code of Canada.

4. 2021-3181 – Prolific Offender Arrested
On May 29, 2021, the Squamish RCMP received a report of uttering threats at Cat Lake, Squamish, BC. The complainant reported that an unknown male had threatened to shoot the complainant and other individuals with a gun. Police attended and arrested the suspect without incident. Police seized a realistic looking airsoft pistol and additionally the suspect was found to be currently breaching their probation conditions and awaits a future court date for possession of a weapon for dangerous purposes and uttering threats under the Criminal Code of Canada.

5. 2021-3229 – Motorcycle Collision with Injuries
On May 30, 2021, the Squamish RCMP received a report of a single motorcycle collision with injuries that happened about 30 km up the Elaho Forest Service Rd, located near Squamish, BC. Search and Rescue and Emergency Health Services were activated and a Good Samaritan assisted with transporting the motorcyclist out of the area. The motorcyclist reported accelerating too much, resulting in the front tire slipping and the motorcycle landing on their leg. The motorcyclist was transported by air to a lower mainland hospital with a suspected broken leg.

Anyone with any information regarding the above files are asked to contact the Squamish RCMP at 604-892-6100, or contact Crime Stoppers at 1-800-222-TIPS, or go to the website www.solvecrime.ca