On Saturday, December 19, 2020, Ashcroft RCMP learned that a large jade boulder had been taken from the Jade Shop in Cache Creek where it had sat for several years.

Investigation thus far has learned that at 9:45 PM, a truck and trailer, with an excavator on it, was at a hotel parking lot next to the Jade Shop. At approximately 11:05 PM, a man walks to the truck, then drives to the Jade Shop where the excavator is then used to lift the jade boulder onto the trailer. The truck leaves with the boulder at approximately 11:50 PM, and is seen travelling along Highway 1 Eastbound towards Kamloops.

The suspect vehicle is later seen turning around on the Deadman Vidette Rd, approximately 32 km off of Hwy 1. Kamloops RCMP later found the trailer abandoned in that area, however the excavator and the boulder were gone from the trailer. On Monday, December 21, 2020, Chase RCMP located an abandoned truck matching the truck used in this theft.

The jade boulder, which is valued between 20,000 to 50,000 dollars, has not yet been found. The police are following up on several investigational avenues but hope the public can help said Sgt. Darren Angman, NCO i/c Ashcroft RCMP. A boulder of that size would be difficult to hide. 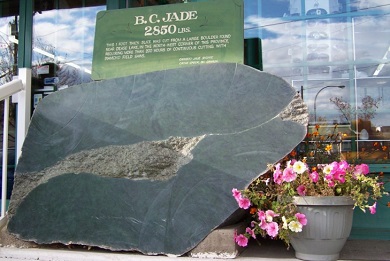