On December 28, 2021 at approximately 10:00 PM, an officer with BC Highway Patrol in Dawson Creek was conducting speed enforcement on Highway 97 as part of December's Impaired Driving CounterAttack Campaign. The officer observed a westbound vehicle travelling at a speed of 158 km/hr in the 100 km/hr zone on icy roads. The officer initiated a traffic stop with the vehicle and soon realized he was dealing with much more than a speeding infraction.

While speaking with the driver roadside, the officer determined the driver had been drinking and had him provide samples of his breath. The driver was found to be over the legal limit and was issued a 90-day Immediate Roadside Driving Prohibition. The driver’s actions also netted him a 30-day vehicle impound. The driver was further issued a violation ticket for Excessive Speed ($368 +3 points) and having tinted windows ($109). 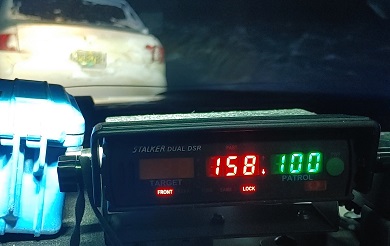 The actions of this driver, had he not been stopped, could have resulted in a serious or fatal collision involving innocent motorists.

The mandate of BC Highway Patrol is to conduct enforcement of driving behaviours that cause serious injury and fatal collisions including: High Risk Driving/Speeding, Distracted Driving, Impaired Driving, Intersections and Occupant Restraints. BCHP works closely with many road safety partners, government agencies and the public in its effort to make our highways safer together.