On Friday, October 15, 2021 at just before 1pm, the Fort St John RCMP received a report of an unwanted person at a business located at the intersection of 100th Ave and 96th St.

Fort St John RCMP attended and located the man sitting on the sidewalk at the store entrance with personal belongings around him.  While frontline police officers were speaking with the man, members of the public also attended the store and shared their perspective of what was going on by sharing their opinion, video and photos on facebook. 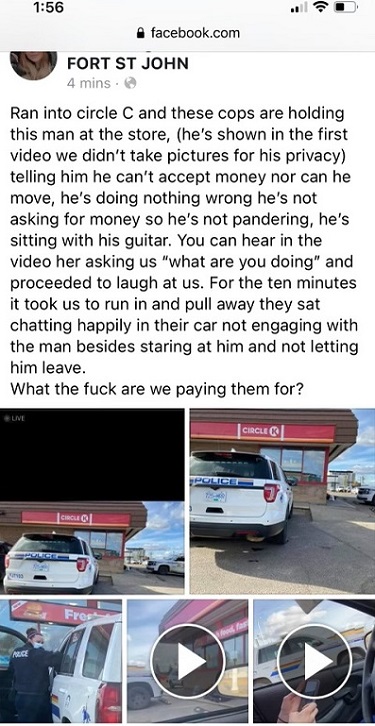 "It is clear from the post that the author did not know how the incident was initiated and what was happening during the incident", said Cst Chad NEUSTAETER, Media Relations Officer for the Fort St John RCMP.  "To clarify for the public what occurred from the police perspective, the Fort St John RCMP thought it would be appropriate to describe what was actually occurring.

In late September, this same individual had been arrested for Mischief, Loss of Enjoyment to Property after the property owner had reported this individual was busking and panhandling (not pandering as per the facebook author) and making customers and staff uncomfortable.  The business owner knew this and also knew that the man had been released on an Undertaking with a condition not to attend the property.  Knowing that the man was breaching conditions of his release, the police were called.

An Undertaking is a document which represents a formal pledge or promise to attend court and abide by specific conditions until the courts have dealt with the matter.  When that pledge or promise is broken, it is a criminal offence and police and the courts can consider an additional breach charge.

In this instance, a new frontline police officer to Fort St John was given the opportunity to work through the investigation process and was conducting police checks to determine if there were in fact conditions and what those conditions were in order to make an educated decision that was in everyone's best interest.

The question posed by the author is "what are we paying them for?"  In this case, the officers were doing their full investigation, acting on behalf of the business (complainant), lawfully investigating a breach of Undertaking and dealing with the public.  During the investigation the man was apologetic to police.  The lead investigating officer exercised discretion and released the man who said he would leave.  The business was updated accordingly and were satisfied with the actions of police.

Sometimes, there is more than meets the eye of the public when it comes to policing.  A snapshot of what is occurring loses all meaning when the context of what occurred prior, which led up to the event, is missing.  In this case, the public also did not get a chance to see the conclusion when the man walked away and the business owner was satisfied.