On October 4, 2021, at 8:37 p.m. a frontline Trail and Greater District RCMP officer was conducting a patrol when she located a 34-year-old Trail man allegedly brandishing a replica handgun near the intersection of Bay Avenue and Daniel Street, in Trail, BC. The officer spotted the handgun sticking out of the top of the man’s fanny pack as she approached him. The man was compliant with the officer’s verbal directions as she seized the look-a-like weapon from him while maintaining her safety. 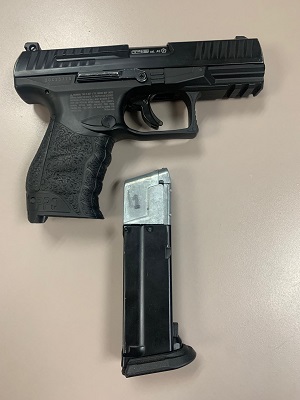 Afterward, the man told the officer that he recently purchased the item and believed it was a legal to possess as his air pistol. The officer noted that the seized handgun appeared to be an exact copy of the real handgun and; therefore’ it was a prohibited device under the Criminal Code. Another alarming fact to the officer that the man was carrying openly in a public space.

Trail and Greater District RCMP would like to warn the public to not purchase such items outside of legitimate sources and advise against any item resembling a weapon in public spaces. Legal purchased air pistols and replica firearms that fire pellets with compressed air are similar in appearance and function; however, are treated vastly different under the Criminal Code. It is extremely important to know the legal description of a firearm as one may face criminal repercussions.

On October 6, 2021, at 10:30 a.m. frontline Trail and Greater District RCMP, BC Highway Patrol officers. Kootenay Boundary Regional Fire Rescue, and EHS attended an incident where a truck and trailer that had left the roadway and crashed down a steep embankment on the side of Highway 3B near the Paulson Bridge, near Rossland, BC. The incident was not been reported to any of the local emergency services. The truck and trailer were checked by emergency service personnel to verify that there was no one left inside either vehicle. 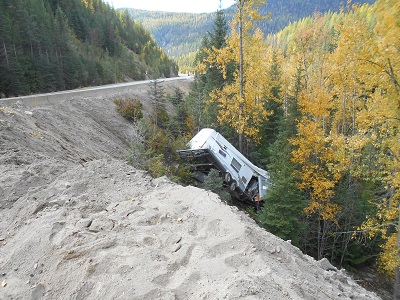 While emergency services were on scene, driver of the truck and trailer arrived on scene. The driver, a 35-year-old Sault Ste. Marie man, stated that he had fell asleep while driving, hit a barricade, then drove off the side of the road without braking. The man managed to crawl out from the vehicle wreckage then make his way to Christina Lake to contact a family member.

The man was issued a number of violation tickets including a $368 fine for Driving without Due Care contrary to Section 144(1)(a) of the BC Motor Vehicle Act.

On October 6, 2021, at 5:15 p.m. Trail and Greater District RCMP received a report about a package theft from the front of a residence in the 1300 block of Birch Avenue, in Trail, BC. The stolen packages contained Bose sound bar, Dewalt drill, and some smaller items.
The suspect was caught on video surveillance footage and is described as 6’ tall, wearing an orange jacket, purple hooded sweatshirt, dark pants, dark boots, and wearing a large red backpack.

If you have any information about this theft, please call the Trail and Greater District RCMP at 250-364-2566 to speak to the investigating officer.

Trail and Greater District RCMP remind the public to lock their vehicles and residences, secure their valuables, and do not store their keys inside their vehicle. The rash of recent thefts will continue and taking simple precautions from theft will better protect you from becoming a victim.

On October 7, 2021, at 8:21 p.m. a frontline Trail and Greater District RCMP officer detained a 44-year-old Montrose man roadside for allegedly speeding in his vehicle on Rossland Avenue, in Trail, BC. The traffic detention became far from routine when the driver began recording the officer and launching into a lengthy diatribe of insults and profanities. The officer remained professional throughout the incident and issued a $138 fine for Speeding Against Highway Sign contrary to Section 146(1) of the BC Motor Vehicle Act.

Later, the Trail and Greater District RCMP were alerted to the fact that the man had posted his explicit filled video to a social media account. The man was contact by Trail RCMP and asked to remove it to which he complied.

This Trail RCMP officer was absolutely professional when dealing with this irate driver. Roadside rage is nothing new to the officer, or any police officer; however, there are limits to incivility and poor behaviour. The man may have received a verbal warning if he had shown some degree of accountability for his actions but instead likely talked himself into the issuance of a violation ticket. The Trail RCMP are members of this community who often go above and beyond on and off duty to serve their community. The officer who was the subject of the alleged verbal attack is a leader in our community in many areas, including impaired driving enforcement. He is a distinguished member of Alexa’s Team and the RCMP stands behind him and his contribution to keeping the roadway and his community safe. Trail RCMP welcomes debate, and there are legal avenues in which to dispute a ticket. Please don’t lose your cool roadside. It’s better to talk calmly with the officer, or have your day in court to speak your case before a judge. - Sgt. Wicentowich

On October 7, 2021, at 2:46 p.m. Trail and Greater District RCMP received a report about a 16-year-old youth allegedly assaulting a 17-year-old youth with Oleoresin Capsisum, better known as pepper or bear spray, in the 1300 block of Fourth Avenue, in Trail, BC. The attack appeared to be unprovoked and the youth suspect fled the scene afterward. The victim fully recovered from the incident. Trail RCMP later located, arrested, and released the suspect on conditions that included not to any contact with the victim.

The youth will make a first appearance on December 9, 2021, in Provincial Court, in Rossland, BC, to face one count of Assault with a Weapon contrary to Section 267 CC of the Criminal Code.

On October 8, 2021, at 7:53 a.m. Trail and Greater District RCMP received a report about a break, enter and theft at Gerick’s Cycle, located in the 900 block of Rossland Avenue, in Trail, BC. The incident occurred around midnight; however, the alarm failed to notify the business owners due to a technical glitch which has been corrected. Two thieves made away with approximately $10,000 worth of items including clothing, a computer, and a $5500 bicycle.

Trail and Greater District RCMP continue to investigate the incident and have requested assistance from the RCMP Forensic Identification Section to process evidence for possible clues to the identity of the suspects.

If you have any information regarding this break, enter, and theft, please contact the Trail and Greater District RCMP at 250-364-2566 to speak to the investigating officer.

On October 9, 2021, at 6:27 p.m. Trail and Greater District RCMP responded to a complaint about a 41-year-old Trail man allegedly causing a disturbance in the 2000 block of Daniel Street in Trail, BC. A query of a RCMP computer system revealed that the man had two outstanding unendorsed warrants for his arrest. When a Trail RCMP officer arrived at the above location, he located and arrested the man in question. The man immediately became aggressive toward the officer and walked toward him while brandishing two large knives. The man refused to drop the knives or comply with the direction provided by the officer. The officer successfully deployed his taser against the man and temporarily disabled him. The Officer took the opportunity to remove both knives from the suspect’s hands while a second officer arrived on scene to assist. The man was secured by the two officers after a lengthy and violent struggle given by the man. The officers lodged the man into the cellblock at the Trail Detachment.

Both Trail RCMP officers received injuries during the violent incident. One of the officers was treated at hospital for a serious cut to his hand and remains off-duty.

Trail and Greater District RCMP will be continuing to investigate the matter and will be speaking to people who witnessed the incident.

The 41-year-old Trail man will make his first appearance on Thursday, October 14, 202, in Provincial Court, in Rossland, BC. He will be facing several charges including:

This was a very serious incident which the two officers successfully resolved. They demonstrated their bravery and dedication to keeping Trail safe with quick action and thinking. Our thought are with our injured officer as he recovers. – Sgt. Wicentowich

On October 5, 2021, Trail and Greater District RCMP received a report about an attempted phone fraud occurring in the Trail area. A local resident was contact by a fraudster who stated she from Norton Security and informed the resident that her account would be charged within 48 hours. The resident was supposed to call a number to get a refund. The resident grew wary that this was a scam and hung up the phone.

Frauds can also be reported to the Canadian Anti-Fraud Website.