Police enforcement of the BC Supreme Court injunction order in the Fairy Creek Watershed area continued today, on July 5, 2021.

During the course of the day, individuals were found to be locked in various devices along the Reid Mainline Forest Service Road, off the Braden Mainline area. A total of 11 individuals were arrested; 5 for breaching the injunction (civil contempt of court), 4 for obstruction and 2 for mischief.

Previous releases have indicated the increasingly dangerous situations protesters are putting themselves in to breach the injunction. The latest incident occurred earlier today when two of the arrested individuals attached themselves in a locking device behind the wheel of a police car in an attempt to prevent it from transporting arrested individuals out of the area. Fortunately, the officer driving the police car noticed them prior to going mobile, otherwise they would have sustained severe injuries. 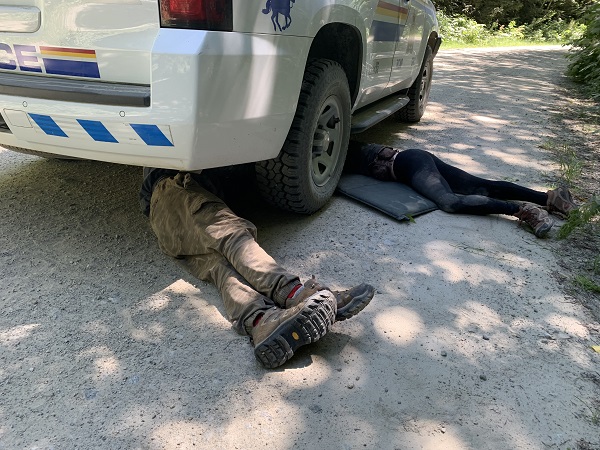 Larger image: individuals attached in a locking device behind the wheel of a police car

All arrested persons were processed and released in Port Renfrew and Lake Cowichan.

Since enforcement began, the RCMP have now arrested 367 individuals; at least 26 of whom were previously arrested. Of the 367 total arrested, 277 were for breaching the injunction (civil contempt of court), 78 were for obstruction, 7 were for mischief, 2 were for breaching their release conditions, 2 for assaulting a police officer, and 1 for counselling to resist arrest.