Columbia Valley RCMP is releasing images of a suspect in connection to the armed robbery of a local pharmacy in an effort to identify the individual and advance its criminal investigation.

On June 27, 2021 just minutes after 12 p.m., Columbia Valley RCMP responded to a report of an armed robbery just committed at the Invermere Pharmasave, situated on 10 Avenue in Invermere BC. Police have learned that the yet to be identified suspect entered the pharmacy, displayed a firearm to an employee and demanded narcotics.

The armed suspect fled the store with an undisclosed amount of controlled substances, states Cpl. Jesse O’Donaghey, spokesman for the BC RCMP in the Southeast District. Investigators believe he further fled the area in a red newer model pickup truck. No employees, or patrons were physically injured during the incident. 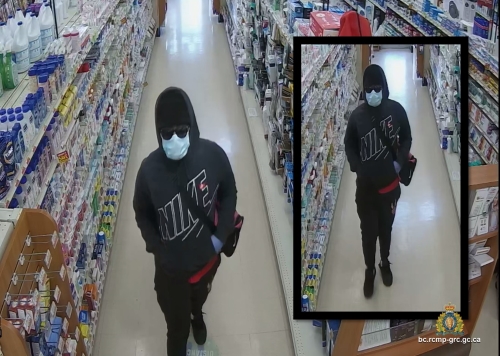 View larger image – A collage of two photos of the robbery suspect walking down an aisle of the pharmacy;

The unknown suspect has been described as a South Asian male, approximately 5 ft 6 in to 5 ft 10 in tall. He was seen wearing a pair of dark pants with a Toronto Raptors emblem, a dark coloured hoodie, a pair of sunglasses, a blue face mask, and a pair of blue latex gloves.

Columbia Valley RCMP is continuing its investigation into the incident, which has included a full review of all available surveillance video footage. We are releasing images of the suspect in hopes that the public can aid in identifying him, adds Cpl. O’Donaghey.

If you witnessed this incident and have not yet spoken to police, or you have any additional information you are asked to call the Columbia Valley RCMP at 250-342-9292.