Campbell River RCMP are seeking the identification of 3 youth:

Campbell River RCMP responded to a report of missing solar lights from a residence on Soderholm Rd on June 12th, 2021.

The property owner had done a bit of sleuthing prior to calling police and had located other smashed solar lights at the corner of Soderholm Rd and Apple Drive.

The owner of the property also had excellent high definition cameras on his property which provided some excellent video of three young men walking down Soderholm Rd. toward Apple Drive at 1:24 am when one of the youth diverted to the front lawn of the residence and took a solar light and ran off with it while one of his friends played out on the road with a yard stake as if he was about to compete in a baton twirling competition. All the youth appeared to be wearing skinny jeans and sneakers, while the individual that approached closest to the camera had his dark hair parted down the middle in a style reminiscent of Moe from The Three Stooges. As he walked away from the home and the street light caught his hoodie it appeared to show that the back of the hoodie had reflective properties that resembled a large number #15. 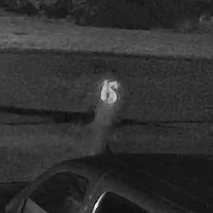 In terms of events such as these, said Cst Maury Tyre, we typically like to deal with the youth involved in a restorative fashion without involving courts. We recognize that Facebook may be far too old school for many young people in town as well as newspapers for our press releases, but we're hoping a parent or guardian recognizes the hoodie and believes that their child should be held to account. We do have better images of faces, but would prefer not to see young faces go out in public to identify them.

There were also similar pointless instances of mischief overnight in the Holm Rd/Joanne Drive area where fence panels were kicked out of fences causing several hundred dollars of damage and may be related.

If you know the young men involved in this incident, please encourage them to take responsibility for their actions. If you have information or other video that may help us identify these youth, please contact the Campbell River RCMP at 250-286-6221.