A very alert resident led police to a private McLure area property where front line officers nabbed a man and a woman they allege were actively breaking into trailers and small cabins.

On May 12, 2021 at 7:30 a.m., front line Barriere RCMP officers responded to a set of suspicious circumstances in McLure, after a vigilant local called police to report observing two suspicious persons entering a private rural property on foot. A Kamloops RCMP Police Dog Service canine team was called in to assist with a search of the area. 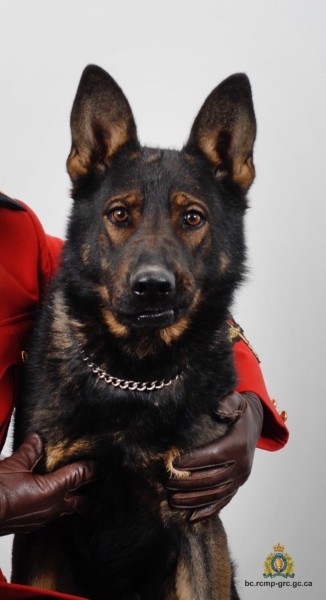 Police Service Dog Kody quickly located a track, and led his handler and front line Barriere RCMP officers to two suspects, who were taken into police custody without incident, states Cpl. Jesse O’Donaghey, spokesperson for the BC RCMP in the Southeast District. While actively tracking the man and woman, police observed evidence along the way to suggest that the suspects were breaking into cabins and trailers in the area.

A 32-year-old Kamloops man was held in custody on the strength of outstanding warrants for his arrest issued out of the Vernon North Okanagan area. While the 27-year-old Barriere woman was released with a future court date in July 2021.

Police allegedly seized a set of brass knuckles, a canister of bear spray, break-in tools and other items from the couple. The investigation remains ongoing at this time. Both individuals face potential charges related to this incident.