Police use spike belts to stop a dangerous driver and seize large quantity of drugs, cash and a handgun

Police seize drugs, cash, and a handgun after the RCMP used spike belts to stop a vehicle that was travelling approximately 180 kilometers per hour and failed to stop on Highway 97, south of Quesnel BC.

On April 15, 2021 at approximately 5:17 p.m., a RCMP North District Traffic Services officer attempted to stop a northbound Mercedes sedan that was travelling 145 kilometers per hour on Highway 97 near Edwards Road. The car failed to stop for police and sped away at speeds that were estimated to be 180 kilometers per hour.

As the Mercedes entered Quesnel city limits, a second police vehicle attempted to stop the car but it again failed to stop and drove into oncoming lanes in a construction zone on Highway 97. Witnesses reported the driver continued to drive dangerously down Dragon Lake Hill, swerving in and out of traffic at high rates of speed.

Police utilized two spike belts on the north side of the Quesnel River Bridge to successfully deflate the Mercedes tires. The driver continued to attempt to flee, colliding with two civilian vehicles and then lodged between a dump truck and another truck. The driver then reversed and rammed a police vehicle.

The police utilized a conductive energy weapon (Taser) and pepper spray to ultimately arrest the male driver. A female passenger was also taken into custody. 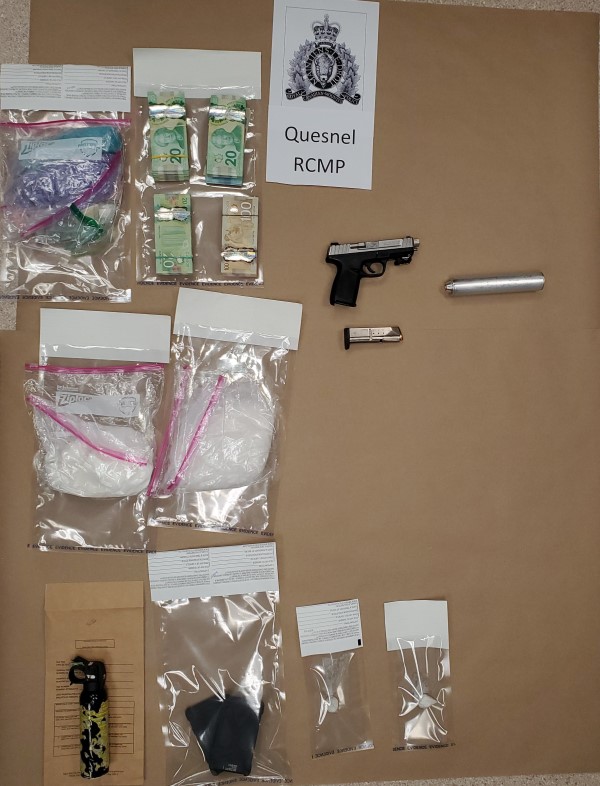 Large: Firearm, drugs and cash that were seized after spike belt deployment in Quesnel BC

Police observed what was believed to be a large quantity of drugs in the Mercedes and applied for a search warrant. As a result, the police seized a loaded 9 mm pistol with a silencer, 723 grams of fentanyl, 659 grams of methamphetamine, 445 grams of cocaine, and approximately $20,000 in cash.

To put the drug seizure into perspective, cocaine is sold at the street level in half grams (0.5 grams) and meth and fentanyl are sold at the microgram (0.1 gram) amounts. When you do the math, this seizure took a lot of doses of harmful drugs off the streets, said Cpl. Matt Isaak of the Quesnel RCMP Crime Reduction Unit. The fact that this man had a loaded handgun with a silencer is also disturbing and speaks to the level of violence associated to the drug trade.

The driver of the Mercedes was reckless and had a complete disregard for the safety of others on the road. Spike belts were used to stop the vehicle before it entered the downtown core as it was the end of the business day where there was a high volume of pedestrian and vehicle traffic, said Sgt. Richard Weseen of the Quesnel RCMP. After the vehicle was disabled, the driver was goal oriented to escape, colliding with civilian and police vehicles. We are fortunate he was stopped before he seriously injured anyone.

The male (33 years old) and female (30 years old) from the Mercedes received minor injuries during the arrest. No citizens or police officers were injured but some vehicles sustained damage during the collisions.

The suspects are not from the Quesnel area and are facing several drug and firearm charges. Additional recommended charges will be forwarded to the Crown on the driver for flight from police, dangerous operation of a motor vehicle, and breach of a release order.