Arrest made regarding fuel thefts

On Friday, March 5, 2021 at 3:25 PM, an off duty officer of the 100 Mile House RCMP observed a local 41 year old man known to Police walking on Birch Avenue in 100 Mile House BC pushing a shopping cart which was loaded with a blue water can.

Local Police were aware that this man was suspected to be involved in the ongoing theft of
fuel from local businesses and individuals over the past year in the 100 Mile House area.

The officer stopped and spoke with the man and took photos of the item, noting it was filled with diesel. The man explained he’d gotten it from a friend. The man was allowed to continue on his way after the brief interruption.

The officer attended the detachment regarding the circumstances and spoke with another officer who identified the blue can as possibly being stolen from a local residence in the previous month. The complainant on that theft file was contacted and provided enough identifiers to prove the blue water can was his and was stolen from his residence on a previous date.

The officer attended the address of the suspect and located the blue can in a vehicle parked at the complex where the suspect lives. The vehicle, a recreational camping van, was then seized by Police so a search warrant could be completed.

On March Saturday, 6, 2021, a judicial warrant authorizing the search of the van was approved and a search was completed. A number of cans, including the aforementioned blue water can still filled with diesel, were seized along with what is believed to be stolen copper pipe. 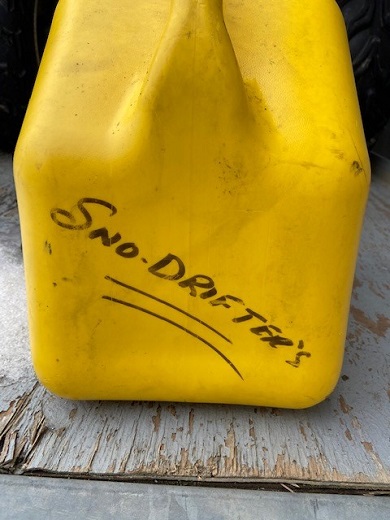 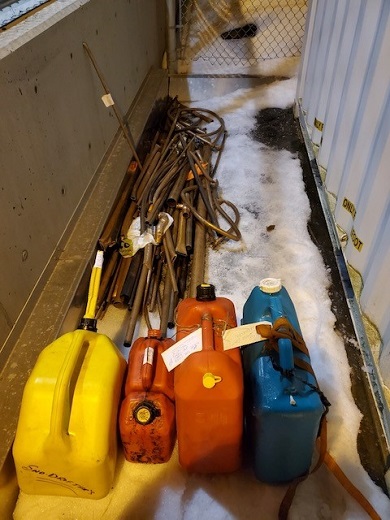 The yellow can has writing on it – Sno-Drifter’s which someone may recognize as their own property.

The suspect was arrested and later released on a number of conditions, including a curfew (the theft of the can had occurred overnight), no possess any break-in tools and no possess any container over 3 litres capacity which could be used for storing or carrying liquid fuel on his person or in any motor vehicle that he would occupy. He also must report to a bail supervisor as directed.

If you have any information about this offence or other fuel thefts occurring in the 100 Mile House RCMP detachment area, please contact the detachment at 250-395-2456 to speak with an officer, or if you wish to remain anonymous, please contact BC Crime Stoppers at 1-800-222-TIPS(8477) to provide your information.