The Alert Bay RCMP took the initiative to build something special for the community for this year. Christmas in the uncertain time of 2020 will be different to the one’s we’re used to with gatherings and family.

However, kids still want to have fun, and adults need to as well. The thought was that we could tour this sleigh without gatherings and bring back some excitement and joy of something new, a surprise for the community at Christmas time. Something everyone could enjoy from a distance with Santa waving as he drove by.

With the partnerships including the Alert Bay RCMP, Namgis, Whe-la-la-U, Village of Alert Bay and Rona/Shoprite it was decided the RCMP would build a sleigh, and Rona/Shoprite would generously donate the majority of the materials. Several community members offered help with trailer use, and the amazing painting on the finished sleigh. The RCMP Indigenous Policing Services also contributed funding needed to complete the Sleigh. 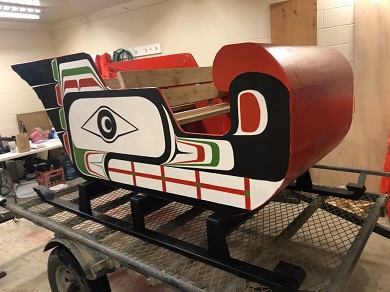 Local Alert Bay artist Wayne Alfred was contacted and agreed to do design for the new sleigh that was built and would beautifully adorn it with a Sisiyuth (pronounced Sea Seau) which is unique to the Kwakwaka’wakw (Indigenous peoples of the Pacific North Coast). The Sisiyuth is a powerful two headed Sea serpent which represents the balance in all of us (similar to the ying-yang symbol) explained the artist.

The entire project started on December 2nd, finished on December 17th and had its grand unveiling at the Alert Bay Elementary school on December 18th, and was considered a great success! The sleigh is to be paraded through the town and placed in the town square along with the decorations already there joining the lights and the full size tree. 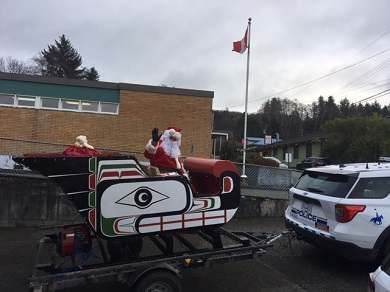 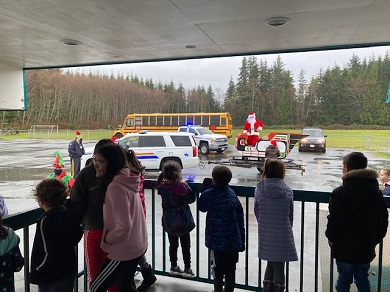 The sleigh made its debut yesterday delivering parcels in a COVID compliant manner to the Whe La Lau homes and then taking part in an emergency services parade later that evening says Alert Bay RCMP Detachment Commander Sergeant Jennifer Prunty. The parade took place during the power outage, bringing light, music and Christmas cheer to an otherwise darkened island. I am incredibly proud of the spirit and dedication shown by our detachment members.

Alert Bay RCMP Constable Scott MacDonald said it was a bucket list item he never knew was on his bucket list. He got to collaborate with a local First Nations Artist, and with the help of the community created something for everyone to enjoy, bringing together old tradition with new to celebrate heritage intertwined with Christmas for the local kids (and adults) in Alert Bay.