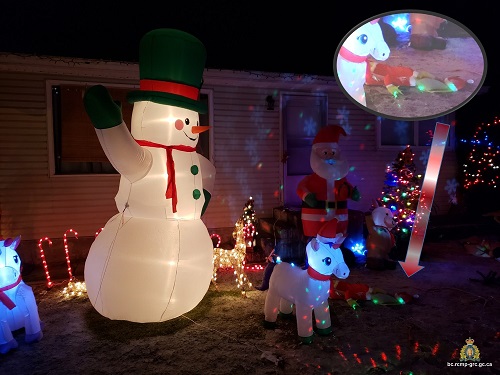 View larger image: A photograph taken by the RCMP, which shows the alleged stolen Christmas decorations. (The Grinch inflatable appears to have a guilty conscious and is seen face down in the photograph);

An alert citizen, scrolling through online social media, is being praised for connecting the dots in a multi-jurisdiction police investigation involving a Grinch-like theft of holiday décor.

On December 7, 2020, Sicamous RCMP received a pair of reports that large inflatable Christmas decorations had been stolen, sometime overnight on December 5, from front yards in the community. A 10 foot tall inflatable Frosty the Snowman was taken from a yard on TCH Frontage Road, while a large Santa in his sleigh was stolen from a home on Cottonwood Avenue.

The tipster had been reviewing online social media posts, and saw that a Sicamous woman shared that her child’s inflatable unicorn had also been taken from the front yard of her Conn Street home. A separate post from a Salmon Arm, resident in the Auto Road area, claimed that their daughter's inflatable Grinch had been swiped from their lawn too.

That very keen citizen reported to Sicamous RCMP that all the suspected stolen inflatable decorations had very recently appeared as a holiday display on the front lawn of a residence in Southeast Salmon Arm.

Sicamous RCMP officers contacted the Salmon Arm detachment who confirmed they also had a recent reported theft of two reindeer from a residence.

Mounties from both Sicamous and Salmon Arm attended to the Salmon Arm home where they found, what they believed to be, all of the stolen decorations on display in front of the home, states Sgt. Murray McNeil, Detachment Commander for the Sicamous RCMP. When questioned by investigators, the resident advised they had recently purchased the items from an unnamed person and claimed they did not know they were stolen. Officers seized the items and have returned them to their rightful owners.

In the end, Santa and his reindeer were rescued from the clutches of a real life Christmas Grinch! adds S/Sgt. Scott West of Salmon Arm RCMP. Saint Nick, Frosty and the reindeer are now all back at their homes where they belong, unharmed. We hope the next time we see them are on Christmas Eve, all except the Grinch of course.