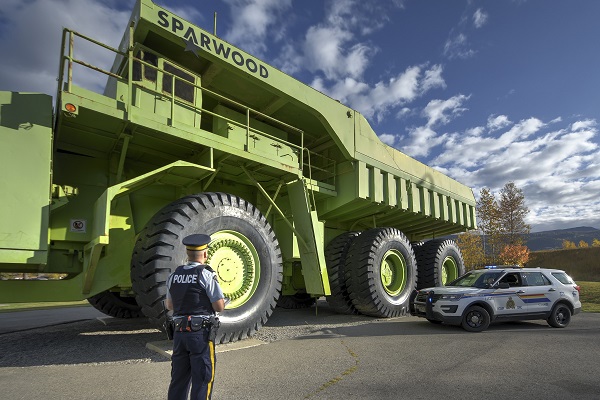 On October 15, 2020, Elk Valley RCMP responded to a fatal motor vehicle collision on rural Kikomun Road near Elko, BC. A member from the public was first on scene and performed CPR; however the 35 year old male from the area had succumbed to his injuries from the accident. No other vehicle(s) were involved and no one else was in the vehicle. It is suspected that alcohol was a contributing factor.

Elk Valley RCMP would like to thank the assistance of Emergency Health Services (EHS), Elko and Fernie Fire Departments, BC Coroner Services and BC Highway Patrol for their assistance at the accident site.

On October 23, 2020, Elk Valley RCMP received a report of an assault that occurred in Fernie. RCMP investigation lead to an arrest of a male from Cranbrook, BC., who also had 2 outstanding warrants for uttering threats. Officers soon learned that the male was in possession of a scale with white residue; a box of unidentified prescription pills; bags of white powder; and a large sum of money. This lead to further charges of Possession for the purpose of Trafficking against the male. The male was released and will be appearing in court in the very near future.

On October 24, 2020, a male from Sparwood turned himself him because of numerous warrants for his arrest. The male had been evading the Police the last couple of weeks until two days ago, when sharp eyed Officers had seen him driving around in a black vehicle. Police presence with numerous patrols in and around the male’s residence prompted the male to surrender himself to the Police. The male was held in custody and then released.

On October 28, 2020, Elk Valley RCMP received a report of a suspicious occurrence in the Elkford area wherein a resident’s dog had alerted its human to an unusual stick in their backyard. Upon closer observation, the stick had a nylon sock attached to its end which appeared to be soaked in some sort of chemical. There was also a piece of garland attached to the stick and wrapped inside it were white/blue almost like crystal pieces.

Elk Valley RCMP together with the BC SPCA-East Kootenay, Animal Protection Officer are investigating this possible case of animal cruelty. If you have any information regarding this incident, you are encouraged to contact the Elk Valley RCMP at (250) 425-6233 or remain anonymous by calling your tip into Crime Stoppers at 1-800-222-8477. You can also contact the BC SPCA Cruelty Investigations Department at (250)427-0036.

On October 31, 2020, a young male walked into the A&W in Sparwood, grabbed and made off with the poppy donation collection box. It was unknown how much money was in the collection box. Elk Valley RCMP has been working with the Staff at A&W to possibly identify a suspect.

On November 02, 2020, Sparwood Bylaw Officer advised the Elk Valley RCMP of what appeared to be ‘racist’ graffiti at the new walking bridge at the end of Lower Matevic Road. The graffiti was spray painted in yellow and medium grey colours and its language was juvenile in nature. In the same area, signs, bollard gates, plastic bin, posts, and a concrete bench was victimized by graffiti. A youth has been identified and possible another youth was involved in this graffiti spree. Due to the disturbing wording and images, it now has been cleaned up.

Elk Valley RCMP continues with their investigation and will be speaking directly with the youth and their guardians. This was a single incident with no other reports to the Police.

On November 08, 2020, Elk Valley Police, Sparwood Fire Department and BCAS responded to a 2 vehicle motor vehicle accident on Highway 3, east of Sparwood involving a SUV and semi tractor/trailer. The driver of the SUV succumbed to his injuries later at the Fernie Hospital.

On November 16, 2020, a Sparwood male was arrested for break and enter into the Sparwood Communications office and stole an expensive radio and an extension cord. The male was identified on CCTV footage and was well known to the Police. Elk Valley RCMP attended to the scene, and after a very brief foot chase, the male was placed under arrest. In addition to being charged with break and enter plus theft, the Officers quickly learned that the male was on conditions to not possess any firearms or ammunition. The Officers located long gun ammunition and a replica Thompson Sub machine gun air rifle, which was seized.The sharp-eyed Officers located an air-nailer which the male had used to ‘take out’ his neighbour’s windows in a previous incidence report to the Police.

The male was released and will appear in court in the very near future.