As things change over the years, the old adage a Mountie always gets its man or woman, was true this past Tuesday outside Hudson’s Hope BC, but in a slightly different manner.

During the frigid fall morning of October 20, 2020 the Hudson’s Hope RCMP was made aware of a young calf that had fallen through ice, into a slough along Farrell Creek Road, north east of Hudson’s Hope.

The on-duty police officer responded to the area and was able to locate the calf clearly in distress. It was obvious that the calf had been doing its best to stay afloat and was getting tired, however could not move forward or backwards due to the surrounding ice. 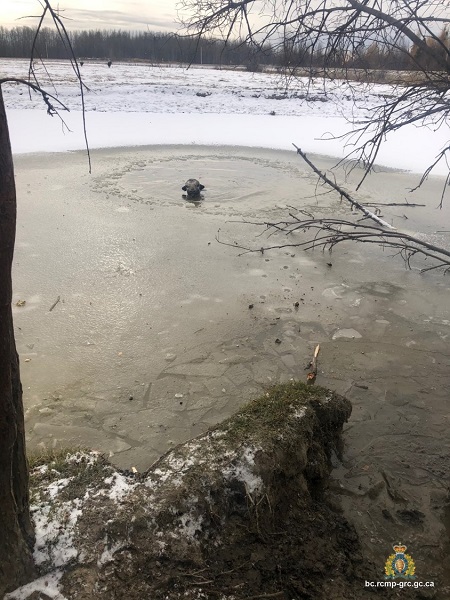 Thinking quickly, and using any means available to the officer, and some locals that had stopped to assist, the ice around the calf was broken. The very tired calf was able to be lassoed and brought to the edge and out of the slough to rest.

When we suit up and start our shifts each day, we really never have any idea what our day on the front line will entail, states Cpl. Rob Gardner, Detachment Commander for the Hudson’s Hope RCMP. The front line officer, who responded to the scene, did a great job thinking quickly and outside the box to work with some locals to break the ice and free the small calf. We’d like to thank all those who stopped to assist with this rescue.

The wet calf, who seemed un-injured during the ordeal, was up and walking by the time the police officer was prepared to leave the scene. 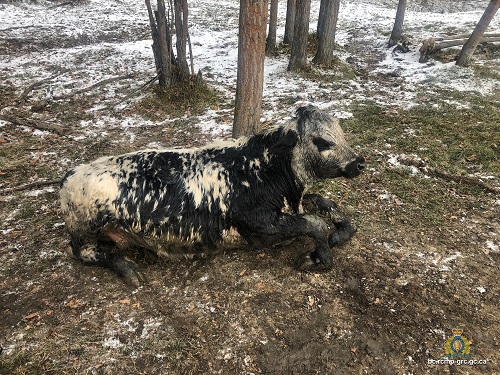