Hudson’s Hope RCMP responded to 34 calls for service between September 20 and October 18, 2020. 87 written violations and warning tickets were issued to drivers between the above dates. Highway and road safety continues to be a big focus for the Hudson’s Hope RCMP with the school zone along Beattie Drive and the construction zones along Hwy 29 being the largest focuses for traffic enforcement at this time.

Police have been monitoring the multiple construction zones along Hwy 29 between Hudson’s Hope and the Half Way River Bridge and have issued a multitude of speeding tickets to drivers over the past few weeks. We are asking drivers to take heed to the white regulatory speed signs and drive accordingly so that the construction workers and flaggers can conduct their work safely.

On September 23, 2020, the Hudson’s Hope RCMP received a report of a suspicious male at the school who was observed using a metal detector around the school grounds. This male was later observed taking a scooter belonging to a local youth and putting it in the back of a silver/grey newer model Ford truck (no canopy or distinguishing details), prior to driving off. Police have been unable to locate the male driver being no plate number was given. This vehicle has since not been observed in the area again.

On September 28, 2020, the Hudson’s Hope RCMP received a report of a break and enter at a local commercial warehouse located along the Peace Canyon Road. Unknown suspects entered the compound via cutting the chain-link fencing and stole several propane tanks. ATV tracks were noted outside the compound. Police are monitoring this area.

On September 30, 2020, the Hudson’s Hope RCMP received a report of a stolen refrigerated Sea-can that had been stolen from a work site along the Core Road. No persons observed at this time, however photograph’s and the serial number on the Sea-can (ACSU202392522G1) have been distributed through the area and anyone who has seen or knows the whereabouts of this item, is asked to contact the local RCMP. 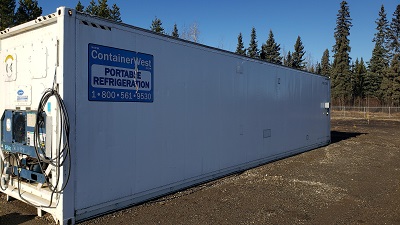 On October 10, 2020 the Hudson’s Hope RCMP received a report of an injured deer observed along Dudley Drive. Upon police locating the deer, it was found that this deer was unable to stand and was acting in an unusual manner, but had no signs of it being injured by a vehicle or another animal. Due to the deer’s condition, it was humanely put down and local Conservation Officers were called who attended and took possession of the deer to have it tested for CWD (Chronic Wasting Disease). Though there have been no confirmed cases of this in the province yet, this deer showed many signs of it so police are awaiting the testing results to come back.

On October 16, 2020 the Hudson’s Hope RCMP responding to a motor vehicle accident involving a school bus and a pickup truck along Canyon Drive. The school bus, which did not have any children on board at the time, attempted to navigate a right hand curve of the road but given the icy road conditions at the time, the bus slid across the centre lane and struck a passing by truck. Minor injuries were incurred and the persons involved were transported to hospital to be medically assessed.

Police are noting that Winter is Coming for all the Game of Thrones fans, and that winter graded tires are mandated between October 1st to April 30th. Failing to comply with putting on winter tires between the above dates can come with a fine of $121.00.

On October 16, 2020 (same icy, snowy day as above), the Hudson’s Hope RCMP responded to another motor vehicle accident along Canyon Drive. for a single vehicle that had slid off the road and side-swiped a hydro pole. Upon speaking with the driver, it was found that no injuries were incurred and the accident was a result of the icy road conditions.

On October 17, 2020, the Hudson’s Hope RCMP received a report of several loose cows at large along Canyon Drive near the 400 Road. Due to the safety concerns that an accident could occur from the loose cattle, police attended the area but were unable to locate the herd. These cows were previously observed freely at large along the power lines near the 400 Road but no owner was found at this time. Police are noting that a fine for cattle at large could be issued to the owner for each individual cow, if found at large and on public roadways.

Anyone with information regarding current or past investigations can contact the Hudson’s Hope RCMP directly at 250-783-5241 or anonymously through Crime Stoppers at 1-800-222-8477. Visit http://crimestoppersnebc.ca for advice on submitting tips online and to browse the areas Most Wanted page.