On Tuesday, September 29, 2020 at 5:10 PM, 100 Mile House RCMP were contacted by a local business near the Save On parking area along First Street of a male, who is prohibited from driving BC wide, driving a white 2000ish Acura 2 door car with a rear spoiler and black hood.

The suspect is well known to 100 Mile House RCMP as being a prohibited driver and having outstanding warrants. The vehicle is believed to be another colour and was likely painted white by the suspect(s), which is common practice in the local area when using stolen vehicles.

An officer in the immediate area located the vehicle within seconds of the call and attempted a traffic stop. The driver of the vehicle, wearing a mask, sunglasses and grey hoodie, failed to stop for Police and continued northbound along Hwy 97. There was one other passenger in the vehicle, who was recognized by the officer attempting the traffic stop, before the vehicle fled the location.

The officer, from a stationary position, observed the white Acura driving at a high rate of speed in the southbound lane while driving northbound along Highway 97. Other officers, who were northbound of that location for other files, stopped vehicles headed southbound along the Highway to ensure their safety due to the driver's dangerous actions. One officer attempted to spike belt the vehicle, but the white car avoided the spike belt, crossed back over into the northbound lane and proceeded northbound along Highway 97. 100 Mile RCMP did not pursue the vehicle at any point during this event.

Please find attached photos of the suspect and the vehicle used in these offences. 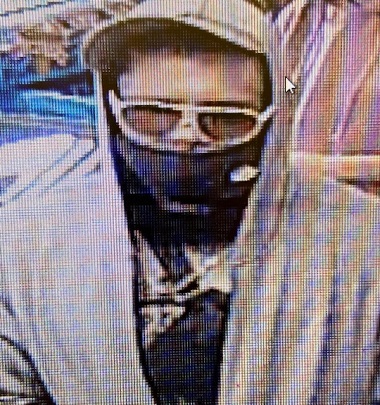