On September 24, 2020, Cariboo Regional Traffic Services (CRTS) was on patrol on Highway 97 near 100 Mile House, BC when an officer came across a "tiny house" loaded on a custom-built trailer being towed by a pickup truck from Vancouver Island.

The officer noted several defects and serious safety concerns with the trailer that was towing the newly built residence. There were visible defects in the welds of the trailer and the trailer had four axles, which is illegal in BC. The trailer was seen to be buckling under the weight of the tiny home.

An officer with the Commercial Vehicle and Safety Enforcement branch (CVSE) was called to the location and a full inspection was completed. Of note, severe buckling was observed along the trailer from the weight of the house, safety chains on the trailer were not attached properly in the event of a hitch issue and the entire set up was over legal height allowances for normal highway operation, among other concerns. 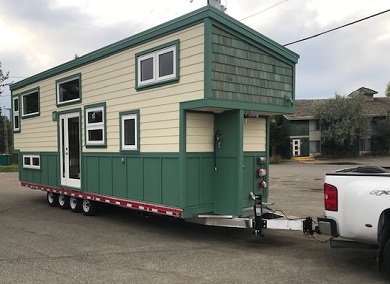 The driver was noted to have no heavy endorsement on his licence. The trailer was impounded by CVSE and numerous violation tickets were served to the driver.

CRTS and 100 Mile House RCMP want to remind the public that if they see or suspect a dangerous load being towed in our area, to contact RCMP immediately. This situation was extremely dangerous to the motoring public. In this case, the trailer was being hauled to the Yukon and, given the state of the trailer, it is unlikely it would have made that distance, which may have resulted in a collision at some point along its route.

The investigation is ongoing by Cariboo Regional Traffic Services with assistance from CVSE and anyone with additional information about this incident may call CRTS in 100 Mile House at 250-395-2456.

Anyone wishing to report a similar issue can contact their local police or call 9-1-1 if urgent.