On July 15, 2020 at 6:30 p.m., Sicamous and Salmon Arm RCMP responded along with BC Emergency Health Services and the Eagle Valley Rescue Society to a six vehicle collision on the Trans-Canada Highway approximately 10 km west of Sicamous. The collision involved two semi-tractor trailer units, three pickup trucks and a SUV.

Police believe a westbound semi hauling a trailer loaded with grocery product crossed a double solid line, after the driver failed to safely negotiate a turn in the highway. Investigators observed heavy brake marks at the scene, approximately 50 meters in length, which began in the westbound lane of the highway and then crossed the double solid line into the oncoming lane.

The semi-tractor trailer unit then flipped onto its side and skidded down the highway for another 50 meters before it finally came to rest after striking an eastbound semi. The semi-truck and trailer also impacted three eastbound pickup trucks and one eastbound SUV causing extensive damage to the three pickups. 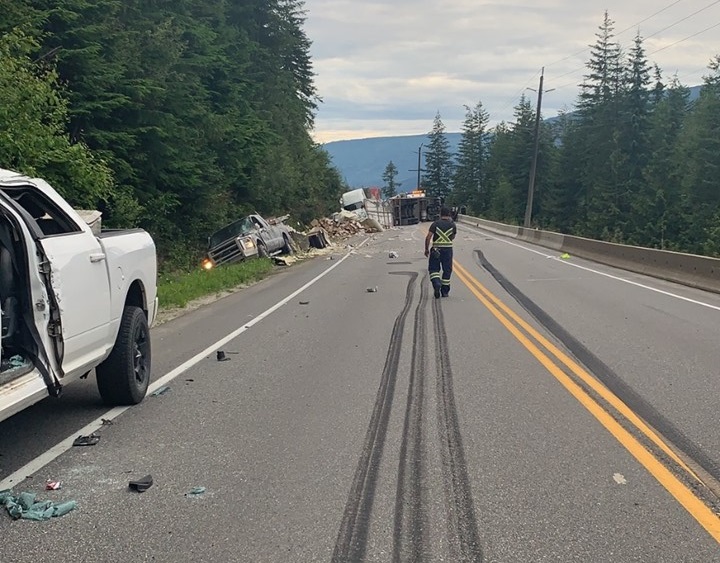 View larger image : Photo taken of the crash scene which shows the extent of the damage caused;

The wreckage, which blocked both lanes of the Trans-Canada Highway and resulted in a closure and detour route, has since been cleared.

Although no evidence was found to suggest that impairment was a factor in the crash, investigators suspect speed may have been a contributing factor to the collision. Weather, road conditions, and visibility were all excellent at the time of the collision. Police charged the driver with crossing a double solid line under the BC Motor Vehicle Act.

This narrow two lane section of the highway has a rock wall on the eastbound ditch and a steep drop behind the concrete barrier on the western ditch, says Sgt. Murray McNeil, Sicamous RCMP Detachment Commander. It is extremely fortunate that this collision did not result in multiple fatalities considering the length the truck traveled before finally coming to a stop and the extent of the damage sustained to all the impacted vehicles.

If you witnessed this crash and have not yet spoken to police you are asked to call the Sicamous RCMP at 250-836-2878.