Eagle rescued by RCMP, spends night in Detachment and gets fed a fish feast

"A career nowhere near ordinary".  That’s what the recruiting posters have been telling potential RCMP applicants for many years, and it definitely applied on Sunday in Ahousaht B.C.

The Ahousaht RCMP were made aware of an injured bald eagle that that was on the roof of the Thunderbird Community Hall and in need of assistance. Two members of the Ahousaht RCMP attended the scene, and made the determination that further help would be needed and contacted the Ahousaht fire Department.

One of the members retrieved his own personal dog crate and blanket, in advance planning of what to do once the bird was caught. A plan was setup to try and catch the injured bird, however the bird had other plans and prior to it being caught, the bird got scared and slid off the roof. The members were right there to use the soft blankets and covered the eagle who was then gently placed into the dog crate. 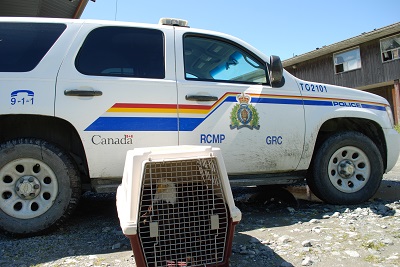 This is definitely something that the RCMP don’t encounter often, but the members on shift did a great job in rescuing the eagle, and planning for its eventual rehabilitation in Parksville Ahousaht RCMP Detachment commander Corporal Cedric Gnyp A neighbour even donated some fresh ling cod for the eagle so eat could eat well while it stayed in custody

The bird was then transported by an Ahousaht RCMP member on their days off to the North Island Wildlife Rescue Center in Parksville for medical assistance and rehabilitation.