On Friday, June 21st, the Surrey RCMP held its annual Officer in Charge Awards recognizing outstanding contributions made to public safety in Surrey by police officers, employees, community partners, and civilians. Recipients were honoured for their courageous efforts and decisive actions, as well as their investigational excellence and innovative problem-solving.

The large number of recipients this year is indicative of the quality of officers, staff and civilians that police and live in Surrey, says Surrey RCMP Officer in Charge, Assistant Commissioner Dwayne McDonald. I believe it is important to pause and recognize the contributions our officers and staff make, as well as the civilians who lend a hand when someone is in trouble. Much of the work being recognized goes largely unnoticed, but it is ultimately these efforts that keep our communities safe. I am very proud of all of this year’s award recipients and grateful for their service, bravery and commitment to community.

In total, 65 awards were handed out, recognizing 376 people. 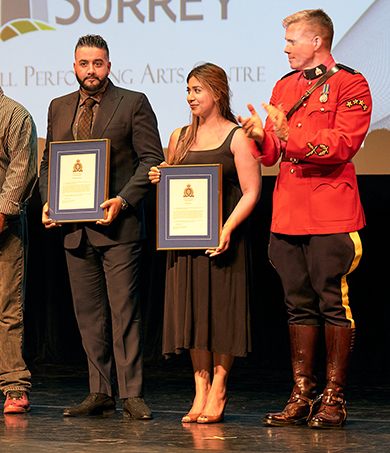 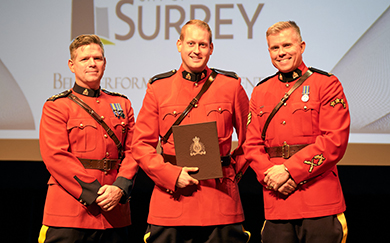 Surrey resident Karampal Sahota was one of six civilians presented with an award. Mr. Sahota was recognized for assisting police in locating the suspect of a pedestrian hit and run that claimed a woman’s life. He and his wife, along with another civilian, followed the suspect and reported his direction of travel which allowed for a quick arrest by police.

I did what any decent person would have done, said Mr. Sahota, whose wife was pregnant at the time. I wish the outcome would have been better, but if I had a choice, I would do it again in a heartbeat. I would have hated to see someone like that get away.

Constable Attila Szalay was recognized for his efforts in recognizing and apprehending an armed, wanted homicide suspect out of Washington state at local Surrey hospital.

Thankfully we have scenarios just like this built into our training, said Cst. Szalay when asked what he was thinking as he approached the suspect. At some point, your training kicks in and takes over. I’m honoured to be recognized, but more proud of the combined efforts that led to this arrest.