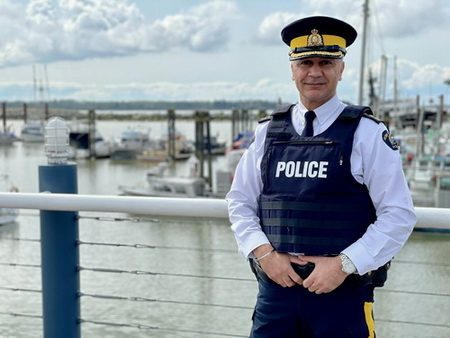 We are pleased to welcome C/Supt. Chauhan to Richmond. Our Senior Management Team is looking forward to working collaboratively with C/Supt. Chauhan in our continued effort to make Richmond the safest community to live, says Superintendent Julie Drotar. Supt. Drotar has been acting as the Officer-in-Charge of Richmond Detachment during the transition in leadership.

C/Supt. Chauhan’s appointment as Officer-in-Charge was first announced by the City of Richmond on March 9, 2022.

I am honoured and thrilled to have been chosen as the new Officer-in-Charge of Richmond RCMP and am excited to officially begin in my new role, says C/Supt. Chauhan, I am looking forward to leading a remarkable team of officers and municipal staff and building on the excellent public safety initiatives and member wellness programs put in place by my predecessor, Assistant Commissioner Will Ng.

To learn more about C/Supt. Chauhan you can visit the Richmond RCMP website to read his biography.