The Revelstoke RCMP is seeking to identify three individuals who may assist in erratic driver investigation.

On October 30, 2019 at approximately 4:00 p.m. Revelstoke RCMP received a report of an erratic driver east of Revelstoke on the Trans Canada Highway. The caller reported that a red BMW from Alberta was unable to maintain its lane, and speeding, which was raising concern of other motorists.

Revelstoke RCMP officers attended the area and located the vehicle near Oak Drive. Officers attempted to stop the vehicle, but the driver allegedly unsafely passed two transport trucks and fled from police.

The vehicle was located by patrolling officers, abandoned at the Big Eddy Market. A man from Alberta was seen exiting the store and was subsequently arrested for a number of driving offences, as well as possession of a controlled substance. 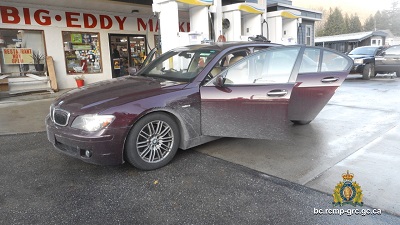 Cpl. Mike Esson of the Revelstoke RCMP states, "We are looking for public assistance in identifying any witnesses that saw the driver and vehicle at the Big Eddy Market around 4:30 p.m. Video footage shows two men walking away from the store and a white truck, believed to be a salvage truck, who may have seen the driver of the Alberta vehicle."

If you have any information about this vehicle or driver, please contact the Revelstoke RCMP at 250-837-5255